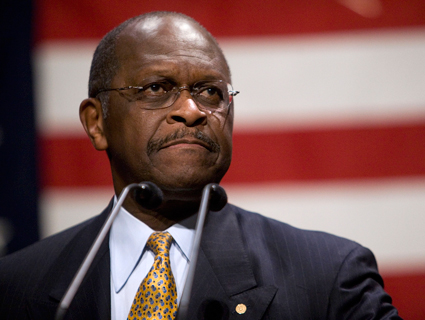 On Tuesday, GOP presidential candidate Herman Cain dropped by Glenn Beck’s radio program to argue that his previous promise to not appoint any Muslims to his Cabinet had been “misconstrued.” As he put it: “I did not say that I would not have them in my cabinet. If you look at my career, I have hired good people regardless of race, religion, sex gender, orientation, and this kind of thing.”

Cain’s position now is that only radical Muslims would be prohibited from serving in his administration. That sounds reasonable. Except he told Laura Ingraham in April that he’s never met a Muslim who didn’t fit his definition of a radical—and in the same interview, alleged that Rep. Keith Ellison (D–Minn.), who’s Muslim, has pledged his loyalty to Allah, not the Constitution. But even if Cain’s original statement, and subsequent defenses of it, were misconstrued, he still hasn’t adequately explained the rest of what he told Think Progress back in April.

When asked for examples of the “creeping attempt…to gradually ease” Islamic sharia law into the American judicial system he explained:

One judge did it up in New Jersey, and ruled in a case. Then last week we heard about a judge down in was it Texas? It might have been Texas where a judge said there was a dispute in a mosque and he was gonna consider ‘eclesiastical’ law in his deliberations, because of a dispute that was going on inside a mosque. This is the United States of America. Just because it’s going on inside a mosque doesnt mean you execute the laws based on what’s going on in the [mosque].”

Cain is right: This is the United States of America. But everything else here is inaccurate. In the civil case in question—which was in Florida, not Texas—the judge (a Republican) ruled that he was going to use “ecclesiastical” law because both parties had agreed, per their mutually agreed-upon contract, to settle their dispute through ecclesiastical Islamic law, in the form of a Muslim arbitrator. That’s totally normal; Christians and Jews also take advantage of independent arbitrators to settle disputes. If the government were to ban the use of such forums, it would mark a dramatic encroachment on the First Amendment’s freedom of religion—I’m fairly certain that Herman Cain doesn’t want to run for President on the platform of restricting Christians’ free exercise rights. The actual trial, the judge noted, would be conducted according to Florida civil law; he was simply assessing whether the arbitration process had been handled properly.

Anyone can make a gaffe, which is how Cain is spinning his “no Muslims” comment. But the more serious problem isn’t that Cain misspoke; it’s that he has taken an extreme, unconstitutional position based on a conspiracy theory that could have been debunked in 30 seconds.