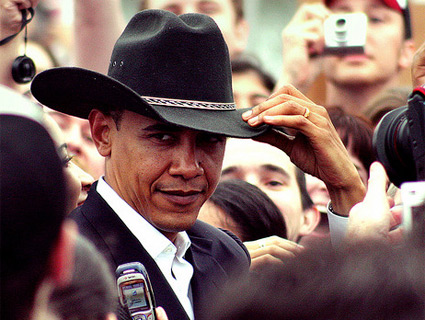 Up until now, President Obama’s commitment to immigration reform has largely meant one thing: enforcement. Unwilling to spend his limited political capital on a sweeping immigration overhaul when the Democrats controlled both chambers of Congress, Obama focused on ramping up immigration crackdowns, deportations, and border security—all efforts likely to please his moderate and conservative critics. In a speech at the Texas border on Tuesday, the president is expected to laud his administration’s achievements in enforcement and border security and pivot to an economic argument for more comprehensive reform. But given that it would be all but impossible to pass such a bill under the current Congress, Obama’s GOP critics will be quick to jump on the president’s move as purely political—and it’s unclear whether Latino voters will be convinced either.

In a call with reporters on Monday evening, senior administration officials gave a preview of Obama’s new immigration message, focusing first the White House’s accomplishments in enforcing existing immigration laws. “Over the past two years, this administration has dedicated more resources to securing the southwest border than ever before,” said one official, boasting of the swelling numbers of border patrol agents, the drop in illegal border crossing attempts, and decreased crime in border communities. “This is the most sustained and serious action securing our border ever in our nation’s history.”

Obama is expected to use such accomplishments to justify a shift toward a more comprehensive immigration strategy, which his liberal critics have been demanding since the beginning of his administration. “We’re not going to solve this problem just with enforcement at the border alone,” said another senior administration official, who said that the president would release a detailed blueprint for an immigration overhaul on Tuesday—one likely to include a pathway to citizenship for illegal immigrants and fast-tracking legal immigration.

Obama will frame such an overhaul “as part of a strategy to ‘Win the Future'” and bolster the economy, said the administration official, portraying immigrants as “major job creators,” innovators, and entrepreneurs. As he’s done before, Obama is expected to emphasize the accomplishments of skilled immigrants and the high-profile foreign-born and immigrant business leaders in the tech sector.

A renewed emphasis on the economic argument for immigration would be a welcome shift—not just for the White House, but for the broader immigration debate, where heavy enforcement tactics like Arizona’s draconian immigration law have taken center stage. Though the Republican Party has moved dramatically to the right on immigration, business leaders like Rupert Murdoch and New York Mayor Michael Bloomberg have remained committed to a comprehensive overhaul, given the economic benefits of immigration. Even the Wall Street Journal‘s notoriously conservative op-ed page has played up the importance of America’s young immigrant labor force to the country’s future economic prosperity. A focus on the economic benefits of immigration could encourage more moderate, pro-business voices to come forward to press for a comprehensive solution.

Even so, Obama may have a tough time convincing his own allies that he’s seriously committed to a fully revamped immigration system, as the Republican-controlled House essentially rules out any action. Pro-immigration advocates are calling for Obama to slow the administration’s deportation of illegal immigrants and ease up on other enforcement tactics—a move the president’s unlikely to make, given the White House’s pride in its heavy enforcement strategy.

And though they recognize that gridlock on Capitol Hill precludes a major bill from passing under the current Congress—with even the popular, smaller-scale DREAM Act failing to pass last year—advocates may still be feeling burned from Obama’s decision to put immigration reform on the back burner earlier in his administration. Instead, the timing of Obama’s renewed immigration push may give the impression that the move is largely a political ploy to win over Hispanic voters in 2012. Until Obama eases up enforcement and lays out a specific timeline to tackle immigration reform in his second term—with Democratic majorities in both houses to support his plan—he may have a tough time coming across as a credible immigration reform advocate.