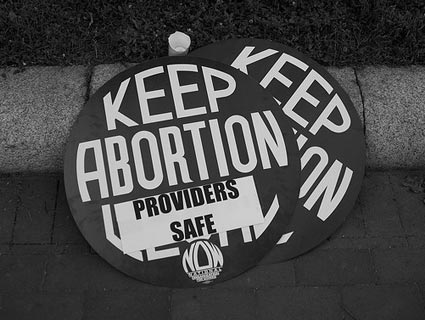 If new guidelines from the Kansas health department are enforced, the last three abortion clinics in the state could be forced to shut their doors this summer.

Back in April, the state legislature passed a law directing the Kansas Department of Health and Environment to author new facility standards for abortion clinics, which the staunchly anti-abortion GOP governor, Sam Brownback, signed into law on May 16. The law also requires the health department to issue new licenses each year, and it grants additional authority to health department inspectors to conduct unannounced inspections, and to fine or shut down clinics.

The department wasted no time in drafting the new rules, issuing the final version on June 17 and informing clinics that they would have to comply with the rules by July 1, as the Associated Press reported Wednesday. Peter Brownlie, president of Planned Parenthood of Kansas and Mid-Missouri, told the AP that inspectors were expected at their clinic in Overland Park, Kansas, on Wednesday. There are only three clinics left in the state: Planned Parenthood’s, a clinic in Overland Park, and the Aid for Women clinic in Kansas City.

The new requirements require facilities to add extra bathrooms, drastically expand waiting and recovery areas, and even add larger janitor’s closets, as one clinic employee told me—changes that clinics will have a heck of a time pulling off by the deadline. Under the new rule, clinics must also aquire state certification to admit patients, a process that takes 90 to 120 days, the staffer explained. Which makes it impossible for clinics to comply. And clinics that don’t comply with the rules will face fines or possible closure.

Women seeking abortions already have a tough time in Kansas, where providers face death threats and evictions. Earlier this year, the state  approved one law banning abortion after 20 weeks gestation, and another restricting private insurance coverage for abortions.

The state’s latest approach—with its remodeling requirements and so forth—is often referred to as “Targeted Regulation of Abortion Providers.” TRAP laws are intended to make it difficult, if not impossible, for clinics to operate, and they have become increasingly common around the country.

“Enactment of this type of legislation discourages health care providers from offering abortion care and can make provisions very burdensome and/or expensive for smaller providers,” says Sharon Levin, vice president of the National Abortion Federation, the professional group representing abortion providers. The laws, Levin says, “do not make abortion safer; they just make it more difficult for abortion providers to remain open, and for women to access the abortion care they need.”

A court fight over the rules is almost inevitable. But anti-abortion groups like Operation Rescue are already claiming success in making Kansas “the first abortion-free state.”