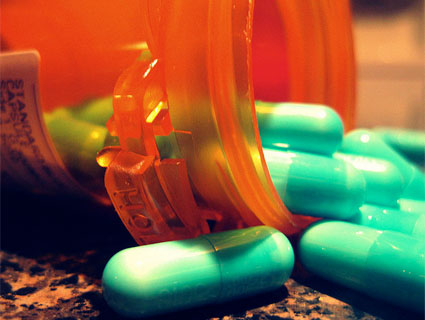 The fate of the global economy hangs in the balance as Congress continues to haggle over tax cuts, revenue increases, and raising the debt ceiling. But at least they’re taking care of big pharma.

On Thursday, the House passed a John Conyers (D-Mich.)-authored amendment to the massive bipartisan overhaul of the nation’s patent system. Technically, the measure pushes back when the clock starts ticking on patent expirations, making it easier for companies to secure the rights to the products they create. But in practice, it seems to have allowed one drug company to maintain its patent on a single drug.

Roll Call reports that in 2000, the Medicines Co. (MDCO) missed the deadline on extending its patent on a blood-thinning drug called AngioMax—by one day. That extension would’ve kept generic versions of the drug off the market until 2014; missing the deadline meant that generics could flood the market by as early as 2010, costing MDCO anywhere between $500 million to $1 billion in profits.

MDCO sued the US Patent Office and WilmerHale, the firm that allegedly bungled the extension application. The stakes for WilmerHale are considerable: if a generic hits the shelves before June 15, 2015, the firm has to cough up $214 million to MDCO, according to a settlement reached earlier this year.

The two firms spent millions lobbying Congress to pass legislation overturning the rejection. And it paid off. Speaking in front of the House Judiciary Committee, Conyers, the committee’s senior Democrat, said the amendment would make a “technical—but important—revision” to federal patent law. “By eliminating confusion regarding the deadline… [it] provides the certainty necessary to encourage costly investments in lifesaving medical research.”

Skeptics see the amendment as an earmarked bailout for MDCO and WilmerHale. And there’s a case to be made that the amendment violates the House’s anti-earmark stance:

Although the amendment does not obligate taxpayer funds be spent on a specific project, by virtue of its narrow scope it falls within the broad definition of an earmark and is a classic example of Congress taking pains to assist powerful interests, Taxpayers for Common Sense Vice President Steve Ellis said.

The language “really has no business in this bill,” said Ellis, who called the amendment “almost a private law that helps one or two companies.”

In the 2010 cycle, health professionals and pharmaceutical companies clock in as Conyers’ sixth and ninth-highest campaign contributors. Lawyers and law firms? #1. But Conyers isn’t the only lawmaker who seems to be performing interest group-due diligence: from 2009 to 2010, lobbying, public relations, and pharmaceutical groups (combined) gave 60% more to House members that voted for his amendment than to those who voted against it, according to the folks at MapLight.org.

Anti-earmark pledge or no, it’s not surprising that Conyers et. al, are taking care of those who take care of them. But bending over backwards to bail out specific corporate entities smacks of some pretty crafty lobbying by MDCO and WilmerHale. It also suggests that, with 2012 looming in the not-so-distant future, some members of Congress are in no position to risk upsetting their most generous donors.