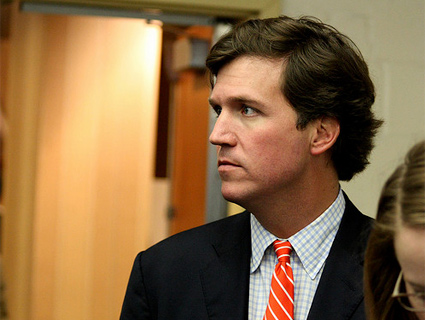 These and other top Republicans have been piling on the Obama administration lately for what has snowballed into a major scandal on the right—what GOPers charge is evidence of cronyism and dirty dealing involving Obama’s signature health care reform law.

The controversy boils down to this: As the Affordable Care Act (ACA) has gone into effect, the Obama administration has exempted certain businesses, states, and insurance companies from complying with the law, often temporarily. Republicans view these waivers as proof that Democrats are granting favors to political allies, pointing, among other things, to a disproportionate number of exemptions granted to businesses in House Minority Leader Nancy Pelosi’s district.

The GOP’s latest round of political attacks has emerged from a series of articles published by Tucker Carlson’s Daily Caller last month. But on closer examination, the web site’s allegations of favoritism don’t hold up.

One the Caller‘s articles, titled “AARP to Receive ObamaCare Break,” reported in late May that the Obama administration had exempted a special insurance policy sold by the American Association of Retired Persons, the senior citizens’ advocacy group, from strict new insurance regulations. The AARP—an Obama ally and fierce defender of the ACA—is among the groups that sell supplemental insurance policies to Medicare participants, known as “Medigap policies.”

Most traditional insurance policies will soon be subject to federal regulation meant to prevent unreasonable premium hikes under new ACA rules that the Obama administration rolled out last month. But federal health reform never subjected Medigap policies to the same regulations in the first place—which the Daily Caller pointed to as a sign of overt political favoritism.

As proof, the Caller quoted a letter from Senate Majority Leader Harry Reid (D-Nev.) and other Democratic leaders to Health and Human Services Secretary Kathleen Sebelius in October, which expressed concern about Medigap premium hikes and asked the federal government to develop stronger oversight. According to the Caller, the letter showed that the White House had even ignored the requests of congressional Democrats to regulate Medigap via the ACA, simply due to the administration’s tight relationship with the AARP. “The appearance of favoritism exists with the new AARP exemptions,” the Caller reported. “Instead of listening to three top Senate Democrats, the Obama administration decided to go ahead anyway with the Medigap exceptions from rate increase reviews.”

The problem is, that’s not at all what the Democrats were requesting in their letter, which the Daily Caller selectively quoted in its story. Medigap, after all, is regulated on the state level and has nothing to do with the ACA. Reid and his colleagues had simply urged the Obama administration to “work with Governors and State Insurance Commissioners” to rein in Medigap premiums.

Despite the Daily Caller‘s claims that the White House had helped out a political ally, there was never really much question that Medigap would be untouched by the reform law. “Congress has kept the same language and the same policy in place since 1996,” says Richard Sorian, assistant secretary of public affairs at the Department of Health and Human Services, pointing out that Republicans have been the most adamant about keeping regulation at the state level. “It continues to be a state responsibility to regulate these policies. It’s as simple as that.”

Sorian adds: “If [the Daily Caller] had asked, we would have told them. But they didn’t.” Other observers of the debate have expressed similar skepticism about the Caller‘s reporting. “None of the ACA touched Medigap, so how could the law’s regs have even done so (the premise of the Caller story)?” wrote Politico last month in its health care newsletter. Nevertheless, the conservative web site had succeeded in turning a nonissue into a controversy that was being used by Republicans to discredit health care reform.

After the story ran, the Daily Caller did publish an update with a scathing comment from the AARP, which wrote that the story’s “mischaracterization of the senators’ letter and the new rules is inexcusable.”

Prior to the flawed Medigap story, the same Caller reporter, Matthew Boyle, had previously insinuated that Rep. Nancy Pelosi (D-Calif.) had pulled strings to secure a raft of health care waivers exempting businesses in her congressional district from new reform-related insurance regulations. Here, too, the Caller had neglected to dig beneath the surface: The waivers in Pelosi’s San Francisco district had come through a third-party insurance administrator whose clients applied for the exemptions in a block, without any contact with Pelosi’s office. (Boyle did not respond to a request for comment. Nor did the site’s editor-in-chief and founder, Tucker Carlson.)

Conservatives have already honed in on the health care waivers granted to labor unions received as evidence of health reform hijinks. But the Caller‘s new attacks on the AARP and Pelosi have launched a full-on conservative feeding frenzy that’s centered around dubious accusations of corruption by Obama and the Democrats. The Daily Caller helped fuel this offensive, then failed to correct the record fully when it became clear its stories were at best misleading. In the words of Sarah Palin, unflippingbelievable.