Photo by Debug the Myths

Read about the pesticide industry’s opposition to bans on toxic chemicals on playgrounds and school athletic fields here.

Last weekend, I had the pleasure of attending a pesticide road show. Yup, you heard me right: It’s a traveling circus of sorts, but instead of sword swallowers and tightrope walkers, the stars of this show are pest-management products. Called Debug the Myths, the tour is sponsored by the lobby group Responsible Industry for a Sound Environment (RISE), which aims to teach people to stop worrying and learn to love pesticides.

I had read about the East Coast leg of the road trip, so you can imagine my delight when I heard that the show was coming to an Orchard Supply Hardware (known ’round these parts as OSH) in Modesto, California. Google Maps said the drive from my house would take an hour and a half, but I needed to run some chicken errands at a feed store out there, anyway. After a pleasant drive (soundtrack by Kenny Chesney and Tim McGraw, courtesy of the local country station) I pulled into the OSH parking lot around noon. The Debug the Myths tent wasn’t hard to spot: 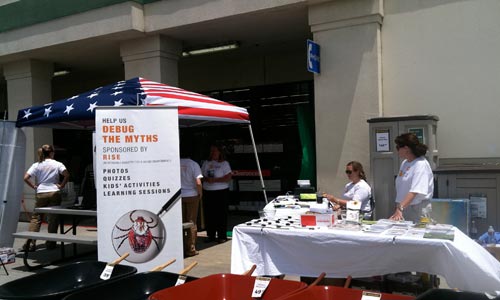 I made my way over. When I arrived, I was greeted by: 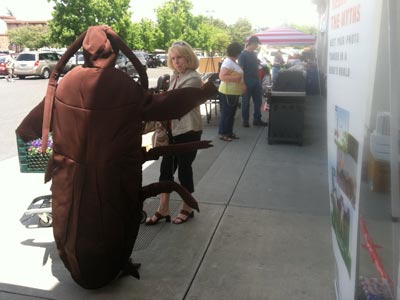 A very friendly giant tick! Here, you can see her chatting up an OSH customer. The tick directed me toward the rest of the display, where I met some other Debug the Myths staffers, including two entomologists from UC-Berkeley’s Environmental Science Policy and Management program, a representative from Target, and a spokeswoman for RISE.

I was unreasonably eager to see the Debug the Myths tour bus, since I had read that the crew traveled in an awesome pest-themed RV. I started to get worried when a quick scan of the parking lot revealed no such sweet ride. But when I asked where it was, one of the staffers gestured toward this:

The new Debug the Myths Prius. “We thought it would be a better choice since gas prices are so high,” she said. How green!

After admiring the Prius, I moseyed on over to the display tables, the first of which offered a bunch of pamphlets about the many virtues of pesticides, herbicides, and synthetic lawn fertilizers. From one called “Does Your Soil Measure Up?” I learned that “in most instances, soil lacks a combination of the required nutrients, which hinders plant growth or can cause plants to yellow and die.” 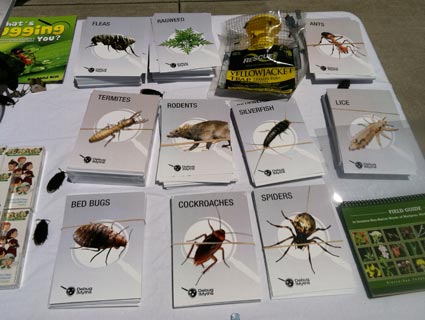 Know thy enemy.At another table, I perused pest dossiers, each bearing the mug of a different dastardly critter (right).

Attending the tables was Karen Reardon (below), spokeswoman for RISE. 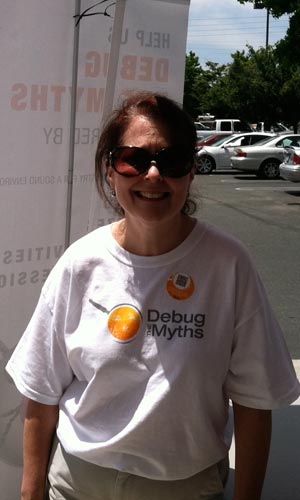 We chatted for a while about the tour, which had already made a few stops in New York and Florida, and was headed to Sacramento later that week. I asked Karen which specific myths she was trying to debug.

“One myth is that certain types of products aren’t necessary,” she said. “Lawn and garden products have enormous benefits. This is just a reminder.”

But enough learning. It was time for some fun. Behind the tables, the Debug staffers had set up a green screen where passersby could have their pictures taken against a “pest’s eye view” background. It was really, really tough to choose a background: 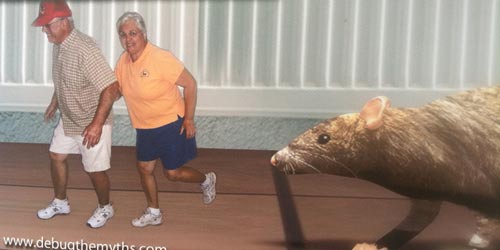 They were all so good. 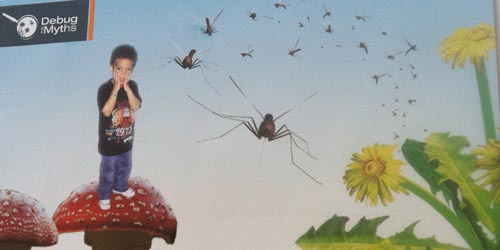 Finally I settled on fleeing from a baseball covered in (powered by?) fire ants. Here’s the result: 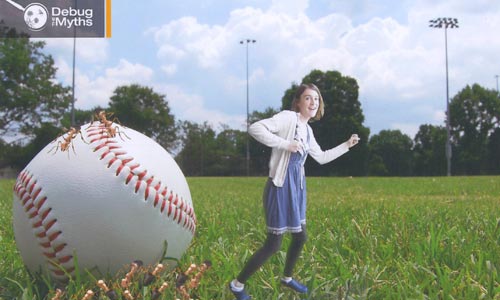 Speaking of which, I had read that one of the stops on the tour would be a minor league baseball game, where, according to the Debug the Myths website, the staff would teach kids and parents about “maintaining outdoor spaces to provide ideal playing surfaces for athletes of all ages.” Not surprising, since RISE has vociferously opposed pesticide bans on school grounds and athletic fields.

I asked Karen about her thoughts on the bans. “There are health and safety implications of eliminating a tool from the tool box,” she said. But what about the negative health effects associated with pesticide exposure? I asked. Had she heard about the recent study linking prenatal pesticide exposure with lower IQs in kids? “Even the researchers on that study say that no conclusions can be drawn from it,” she said. And besides, “pesticides are the most widely studied substances in the world, besides pharmaceuticals.”

Am I the only one who doesn’t find this comparison particularly reassuring? 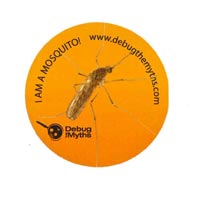 I finished up the tour by taking the “What Pest Are You?” quiz. (You can take it, too!) The result? I’m a mosquito. I was awarded a sticker (above) saying as much. I’m sure the Debug staffers agreed.