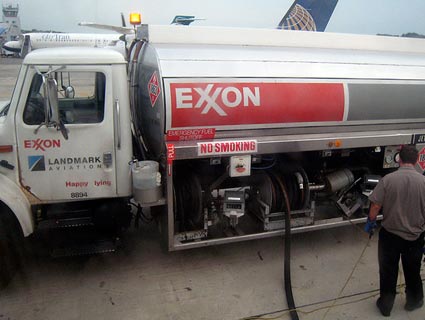 Back in 2008, ExxonMobil pledged to quit funding climate change deniers. But according to new documents released through a Greenpeace Freedom of Information Act request, the oil giant was still forking over cash to climate skeptics as recently as last year, to the tune of $76,000 for one scientist skeptical of humankind’s role in global warming. This—and much more—came to light in a new report about the funding of Wei Hock “Willie” Soon, an astrophysicist with the Harvard-Smithsonian Center for Astrophysics.

Soon has been a favorite among climate skeptics for years, since coauthoring a paper back in 2003 that claimed that the 20th century was probably not the warmest, nor was it unique. That paper, published in the journal Climate Research, was widely criticized by climate scientists for its content, not to mention the funding it received from the American Petroleum Institute. An astrophysicist by training, Soon has also claimed that solar variability—i.e., changes in the amount of radiation coming from the sun—are to likely to blame for warming temperatures.

In 2007, Soon coauthored a paper challenging the claim that climate change harms polar bears. The paper drew plenty of criticism, as it was funded in part by the American Petroleum Institute, The Charles G. Koch Foundation, and ExxonMobil—groups with a clear interest in the debate over whether the bears merited endangered species protections.

Given that Soon had previously disclosed some of his corporate funding, in December 2009 Greenpeace submitted a Freedom of Information Act request to the Smithsonian Institution asking for information about Soon’s funders and any conflict of interest forms he may have submitted. In response, Smithsonian produced a list of his major bankrollers, which included more than $800,000 from major energy interests. According to the document, Exxon provided $55,000 for a study on Arctic climate change in 2007 and 2008, and another $76,106 for research into solar variability between 2008 and 2010.

ExxonMobil spokesman Alan Jeffers accused Greenpeace of “peddling this discredited conspiracy theory” about its support for climate deniers. He maintained that the company stopped funding Soon in 2009. “We made a decision to discontinue funding groups whose positions on climate change weren’t very constructive. It was distracting,” said Jeffers. “The issue of climate change is so important, it shouldn’t be distracted by the type of things Greenpeace does,” Jeffers said.

Even if Greenpeace and Smithsonian are wrong and ExxonMobil has stopped funding his work, Soon still appears to be getting significant backing from other fossil fuel companies, with the coal giant Southern Company providing $120,000 to look at “solar variability and climate change signals from temperature” in 2008 and 2009, and the Koch Foundation providing Soon another $65,000 last year.

“Dr. Soon needs to make clear what exactly these corporations expected from him,” said Kert Davies, research director at Greenpeace. “There’s been a long-term campaign of climate denial for over 20 years, organized by big coal and big oil. This is evidence that it continues to this day.”