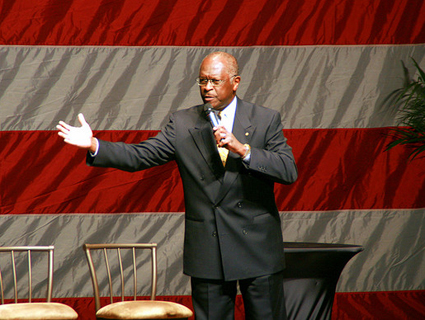 GOP presidential candidate and pizza baron Herman Cain was in the great Midwest earlier this week to talk to the Iowa Family Leader, a socially conservative organization that’s leading the fight in the state against gay marriage. Cain wasn’t there to talk about marriage, though; he was there to offer up a bold new plan to rein in the runaway bureaucracy: if elected president, he will only sign bills that are three pages or less. Per Think Progress:

“Don’t try to pass a 2,700 page bill—even they didn’t read it! You and I didn’t have time to read it. We’re too busy trying to live—send our kids to school. That’s why I am only going to allow small bills—three pages. You’ll have time to read that one over the dinner table.”

This is a nice little applause line, but it’s not going to help change the growing impression that Cain has no idea what he’s talking about.

As this nice Eric Cantor photo-op illustrates, many bills passed by Congress are indeed very long. Sometimes, this is because they’re very complex pieces of legislation with lots of moving parts that need to be enacted as a package in order to work. Sometimes this is because they’re the congressional equivalent of listicles, long appropriations bills that basically just incorporate an endless number of approved projects and programs. (Cain might disagree with that practice, but often those listicles fund things he likes—it’s one of the ways we fund the military.)

But in every case, the size of the bill is dramatically inflated by the fact that the Government Printing Office uses a huge font and enormous margins, of the sort that even a writer’s bloc-afflicted ninth-grader would consider a bit too overt. In the case of the Affordable Care Act, meanwhile, Rep. Cantor’s killer visual was artificially enhanced by the fact that he insisted on printing the bill single-sided. And as Ezra Klein noted last year, the amount of dull but necessary legalese in each bill further stretches the text out by about 500 percent.

Indeed, as Marie Diamond notes, even landmark conservative achievements that Cain undoubtedly supports, like the Bush tax cuts and the USA PATRIOT Act, would have been subjected to a big fat veto from the Godfather under his three-page limit. The same goes for Paul Ryan’s budget—or any budget bill, for that matter. Cain is essentially pledging that, if elected president, he will not sign any bills of consequence. Although considering some of his other ideas, that might be the best Americans can hope for.