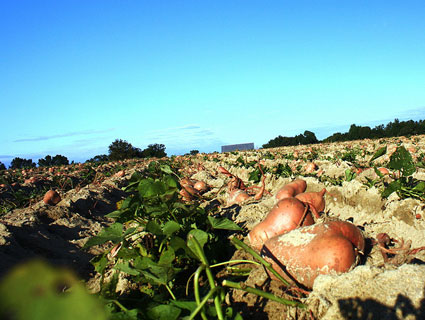 Georgia has been among a handful of states to crack down on immigration in recent months, passing “copycat” legislation similar to Arizona’s sweeping law. Now Georgia’s farms are complaining that they will soon face labor shortages because immigrants are now reluctant to come to the state for fear of reprisal. According to a recent survey conducted by the state’s agricultural commissioner, farmers are expected to be short some 11,000 workers over the course of the season, the Atlanta Journal-Constitution reports.

Georgia farmers say that immigrant workers who normally migrate from Florida for the seasonal work are staying away this year because of the new law. The measure, which takes effect in July, requires police to check the immigration status of suspects stopped for other offenses. And so far, not enough documented laborers have stepped up to take undocumented immigrants’ farm jobs, more than half of which pay an average of $8/hour and about a third of which pay from $9 to $11/hour. If the labor shortage continues, Georgia farmers will be “forced to leave millions of dollars’ worth of blueberries, onions, melons and other crops unharvested and rotting in the fields,” says Jay Bookman, a columnist for the Atlanta Journal-Constitution.

Republican Gov. Nathan Deal—who spearheaded the immigration crackdown and put the issue at the heart of his 2010 campaign—has put a few potential solutions on the table, including a dubious-sounding proposal that my colleague Lauren Ellis covered earlier this month in which farmers would hire 2,000 unemployed convicts who are free on probation to work on the farms instead.

The dilemma facing Georgia’s largest industry makes it clear that state legislators didn’t think through the serious ramifications of their sweeping new immigration law. Like it or not, immigrants are an integral part of the workforce in Georgia, as elsewhere, and simply trying to cast them out without making further adjustments to the labor market and economy can have unintended consequences. To that end, observers have admonished Georgia lawmakers for acting too hastily, per this editorial from the Valdosta Daily Times that Bookman quotes:

Maybe this should have been prepared for, with farmers’ input. Maybe the state should have discussed the ramifications with those directly affected. Maybe the immigration issue is not as easy as ’send them home,’ but is a far more complex one in that maybe Georgia needs them, relies on them, and cannot successfully support the state’s No. 1 economic engine without them.