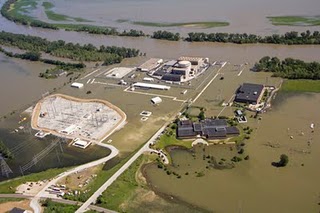 The internet has been making much ado about the flooding currently affecting a Nebraska nuclear power plant. But via the Associated Press, it appears that, at least for now, the plant isn’t suffering major problems:

Missouri River floodwater seeped into the turbine building at a nuclear power plant near Omaha on Monday, but plant officials said the seepage was expected and posed no safety risk because the building contains no nuclear material.

An 8-foot-tall, water-filled temporary berm protecting the plant collapsed early Sunday. Vendor workers were at the plant Monday to determine whether the 2,000 foot berm can be repaired.

Omaha Public Power District spokesman Jeff Hanson said pumps were handling the problem at the Fort Calhoun Nuclear Station and that “everything is secure and safe.” The plant, about 20 miles north of Omaha, has been closed for refueling since April. Hanson said the berm’s collapse didn’t affect the shutdown or the spent fuel pool cooling.

The Missouri River flooding is no joke; neither is a power plant sitting in two feet of water. It’s certainly a situation worth keeping an eye on, but doesn’t appear to be a crisis. Given the crisis at a nuclear plant following the tsunami in Japan just a few months, it’s easy to see why people are jumpy. But remember: The problem at Fukushima was that the earthquake and tsunami wiped out the main electrical supply and screwed up the battery back-ups, which caused the cooling system to fail. The loss of power was the disastrous part.

Now it’s a concern that the berms that were supposed to protect the Fort Calhoun Nuclear Station apparently failed, and that they had to rely on back-up power for about 12 hours. But as the Iowa Independent explains, for now it appears safe:

The Calhoun plant was built at 1,004 feet mean sea level, and can sustain flood waters up to 1,014 feet. On Sunday, when the dam broke, the Missouri River was at roughly 1,006.5 feet near the Calhoun station. If floodwaters reach 1,009 feet, the plant would likely switch from the lowest level of emergency status (where it has been since June 6) to the second of four emergency levels. Based on the latest figures given by the U.S. Army Corps of Engineers, which is gauging the release of water from dams upstream, flooding near Calhoun should peak at 1,008 feet.

This should, however, stand as a reminder that our own infrastructure is also vulnerable to the whims of natures.