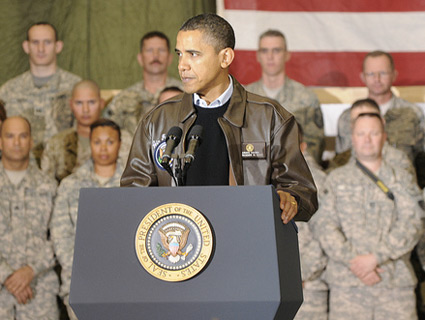 UPDATE: No surprise. In his speech on Wednesday night, Obama said he would de-surge the 33,000 troops he surged into Afghanistan after December 2009. He noted that 10,000 troops will be withdrawn by the end of this year, and the rest by September 2012. After that, he said, there will be a steady withdrawal, as the United States completes a transfer of security responsibilities to the Afghan government by the end of 2014.

Thirty thousand. That’s reportedly the number of troops President Obama plans to announce on Wednesday night that he will pull out of Afghanistan by the end of 2012 (with 10,000 to be out by the end of this year). Call this the Goldilocks approach—not too much, not too little. But the withdrawal of these troops will probably freak out the hawks (cue griping from Sens. John McCain and Lindsey Graham and their neocon comrades) while failing to satisfy the doves of the right and left who have been calling for an end to the war. Obama, though, will be able to present a strong argument that calling back about one-third of the US troops deployed in Afghanistan is indeed making good on his promise to start a meaningful drawdown in July 2011.

So prepare for plenty of debate and hand-wringing over the number. But the more fundamental matter remains: What are America’s aims in Afghanistan and can they be accomplished?

White House aides consistently say that the goal of the war is to “disrupt, dismantle, and defeat Al Qaeda.” That’s been Obama’s mantra since entering the White House. And this seems like a reasonable goal. But it’s been unclear—at least to much of the public—why it’s necessary to maintain a large, on-the-ground troop presence in Afghanistan, where there are only a handful of Al Qaeda fighters. The obvious retort is: to keep Al Qaeda from once again exploiting Afghanistan, a state with weak governmental and security structures, as a safe haven. But as Obama demonstrated with the covert and daring mission that killed Osama bin Laden, a ground operation involving tens of thousands of troops targeting the Taliban and other indigenous forces might not be the most effective or efficient way to crush Al Qaeda. Especially when such an endeavor requires an extensive partnership with inept, corrupt, and less-than-reliable institutions—that is, the Afghan government and security forces. Days ago, Afghan President Hamid Karzai denounced the United States and other Western allies for exploiting Afghanistan, sucking money out of it, and dishonoring the country’s people. Outgoing US Ambassador Karl Eikenberry responded sharply: “When Americans, who are serving in your country at great cost—in terms of lives and treasure—hear themselves compared with occupiers, told that they are only here to advance their own interest, and likened to the brutal enemies of the Afghan people…[they] are filled with confusion and grow weary of our effort here.”

With a partner like that—and at a cost of over a hundred billion a year—it’s no wonder that Obama’s war in Afghanistan is increasingly coming under political assault. Not surprisingly, this comes as public opinion turns further against the war. A recent poll showed that 73 percent of American desire withdrawing a “substantial number” of US combat forces from Afghanistan.

For years, Afghanistan—as a political or policy question—was off the political radar screen in the United States. It was hardly an issue in recent elections, and it’s provoked little debate in the House and Senate. But in recent months, discussion and criticism have increased—on both the right and the left. A large number of House Democrats joined with a handful of Republicans last month to force a vote on requiring Obama to establish a timetable for withdrawal; they lost on a close 215-204 vote. Twenty-seven senators—including two freshman Republicans, Mike Lee and Rand Paul—have sent a letter to Obama demanding a “sizable and sustained” withdrawal. Leading Democratic senators, including John Kerry, who chairs the foreign relations committee, and Carl Levin, who heads  the armed services committee, have been leaning on Obama to proceed with a significant draw-down. Mississippi Governor Haley Barbour, when he was flirting with the notion of running in the GOP presidential primary, voiced skepticism about the war in Afghanistan. At a recent candidates debate in New Hampshire, front-running Mitt Romney exclaimed, “It’s time for us to bring our troops home as soon as we possibly can, consistent with the word that comes from our generals.’’ He was quickly bashed by McCain and Graham. The latter warned Romney: “If you think the pathway to the GOP nomination in 2012 is to get to Barack Obama’s left on Libya, Afghanistan, and Iraq, you’re going to meet a lot of headwinds.” And McCain, slamming the “isolationist strain” among the 2012 contenders, played the ultimate GOP trump card: “I wonder what Ronald Reagan would be saying today… That’s not the Republican Party of the 20th century, and now the 21st century. That is not the Republican Party that has been willing to stand up for freedom for people…all over the world.” Still, Sarah Palin told Fox News that she’d like to see the United States “back out a little bit perhaps sooner”—as long as that would be okay with General David Petraeus. (Pentagon push-back against Obama’s withdrawal is possible, but for months the President has been saying he is confident that military leaders will accept his decision.)

Since becoming president, Obama has been able to escape political fisticuffs over Afghanistan. His party, though not happy with his surge-first policy, did not raise too big a fuss about his decision to send more troops. Republicans generally backed Obama’s assertive stance, while fretting aloud that the commander-in-chief might eventually go soft. And doubting GOPers did not have the political space to make a charge of their own. Yet now there appears to be opportunity for all camps to express themselves fully, and this could lead to a storm on several fronts—Democrats opposing Democrats, Republicans tussling with Republicans—as partisans and policy experts battle over what constitutes a true withdrawal (Levin, for instance, wants 15,000 troops out by the end of this year), whether a withdrawal is the right course, and whether and how to proceed post-withdrawal with the mission of handing over security responsibilities and anti-Taliban operations to the still-hapless Afghan government and security forces. And by the way, there’s the contentious issue of whether Kabul (and Washington) ought to be attempting some sort of negotiations with some factions of the Taliban.

In the middle of all this debating sits the commander in chief. Obama will be able to depict a troop reduction of 30,000 as a serious step toward disengagement. That may win over—or at least not irritate—the independent voters he will need in 2012; it may appease Democratic base voters who have always been uneasy with the war (though not the progressive leaders who decry it). And there’s no telling whether this reduction will lead to true progress in Afghanistan—whatever that might mean. Nevertheless, Obama’s announcement is likely to fuel the rising debate in Congress and within the GOP roadshow, rather than calm it. This slow end to his surge in Afghanistan could well trigger a surge in political volatility at home—as this unpopular war slogs on and the next US election nears.