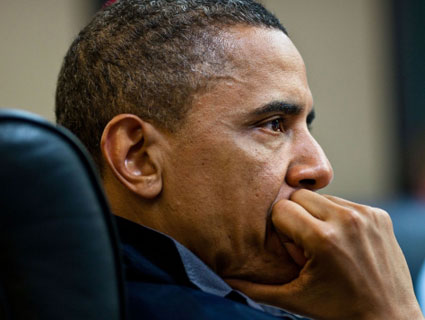 Can President Barack Obama triumph by being the grown-up in chief?

During a White House press conference on Wednesday, the president declined to get into a food fight with Republicans playing chicken with the debt ceiling negotiations. Repeatedly, he noted that he expected GOP leaders to act responsibly. He did not lambast House Majority Leader Eric Cantor (R-Va.) and Sen. Jon Kyl (R-Ariz.), the GOP representatives to the in-limbo talks led by Vice President Joe Biden, for storming out of the negotiations because the White House insists that any deficit reduction plan include revenue boosters, not just spending cuts. “Call me naive,” he said, “but my expectation is that leaders are going to lead.”

So is Obama naive or crafty?

At other points during the press conference, Obama denigrated Congress, commenting that his two daughters usually complete their homework assignments a day before they are due—while Congress often doesn’t get its work done until moments before a deadline. He urged Congress to remain on the job—and forego next week’s recess—until the debt ceiling matter is settled. “At a certain point, they need to do their job,” he said, with a moderate measure of exasperation. Still, he remarked that he believed the Republicans “will do the responsible thing.” He did challenge the GOP stance of opposing any revenue increases as part of a debt reduction package. Do Republicans really want to protect tax breaks for corporate jet owners, hedge fund managers, and oil companies, and force more cuts in spending for college loans, food safety, and critical medical research? he asked. Do they really want to see the United States default? “I don’t think that’s a sustainable position,” he remarked.

But here’s the problem: many Republicans oppose any move even resembling a tax hike, and they do want to slash government spending, no matter the cutbacks in services and investments. And a bloc of Republicans, members of the tea party wing, have no qualms about pushing the United States government into default.

Obama is dealing with radical hostage-takers who do not share his sense of responsibility. So when he asks these questions—Will the GOP truly prevent young adults from getting college loans so mega-profit-making oil companies can keep their special tax breaks? Will they really push the nation into a financial crisis to score an ideological point about supposedly out-of-control spending?—is Obama underestimating the opposition? Or is he posing rhetorical queries designed to position himself (especially in the eyes of independent voters) as the reasonable fellow in this dust-up?

Obama certainly knows what he’s up against: Republican extremists who threaten irresponsible action to achieve severe policy aims. He is not naive. But in public, he stops short of fully calling out the Republicans, perhaps believing that doing so would prevent him from achieving an above-the-fray status that affords him greater political influence and, thus, a better chance of ultimately prevailing. Yet such a tactic does run a risk: the Republicans remain un-deligitimized. If Obama is not going to depict the GOPers as reckless ideologues driving the nation to the brink of financial crisis and possibly into another recession, who will? Nancy Pelosi? Harry Reid? Tim Geithner? Debbie Wasserman Schultz? No one else is well positioned to present this case.

Obama also has yet to mount much of a messaging campaign regarding the consequences of a debt default. And Capitol Hill Democrats have started grumbling about that. Nobel Prize-winning economist Robert Solow says that Obama and perhaps Treasury Secretary Geithner ought to be educating the public on the dangers of default every day to “make it clear to ordinary people that raising the debt limit is not something to toy with.” The Republicans, he adds, are engaging in blackmail, and the president has to persuade the public that such political brinksmanship is highly risky. Indeed, one reason to stage a fight in politics is to draw attention to an issue in order to educate voters. For better or worse, conflict usually engages more than calm discourse.

Though as Obama noted at the press conference, he eschews “scare tactics.” He said he prefers to be restrained “so folks don’t get spooked.” Yet he’s up against Republican foes who have no reluctance to spook the public. The president appears to be betting he can outmaneuver them by being responsible—and by turning this confrontation into a game of fox and chicken. But can you outfox a driver who is willing to steer straight off a cliff?