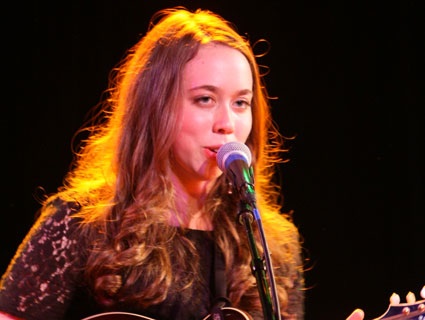 At barely 20 years old, roots singer Sarah Jarosz has already recorded two full-length albums and performed at Telluride, Austin City Limits, Bonnaroo, and on A Prairie Home Companion. On her new CD, Follow Me Down, she plays eight instruments, and normally travels with four—guitar, mandolin, banjo, and her new favorite, octave mandolin.

Though she spent her teen years at folk festivals and mandolin camps, Jarosz opted to put year-round touring aside to pursue a degree at New England Conservatory of Music. “My parents are both teachers and I always wanted to have the college experience,” she told me eagerly. She’ll major in Contemporary Improvisation—put simply, the development of personal style.

Jarosz embarked on a summer tour just before the release of her album last Friday. Follow Me Down harnesses the joyful anticipation of early summer, offering instrumental highlights and silky vocals. While the originals stand on their own as sweet, stirring numbers, her covers on the album steal the show. Jarosz manages to weave something new and unexpected into old numbers, while still paying tribute to the artists who first spun them.

“They kind of become apparent when I should cover them,” she explains. “If it’s not gelling, and it’s not happening, than I might be like, well, maybe this isn’t the best song for me.” Fans have gone wild for her live performances of Gnarls Barkley and Tom Waits, and on Follow Me Down, she takes a stab at Bob Dylan, covering “Ring Them Bells,” a song her dad used to play around the house. “I remember just loving it instantly, and working it up on the mandolin, and it really quickly settling into the way I play it now.” Her voice irons out the beloved creases in Dylan’s delivery, turning the tune into a smoother country hymn, highlighted by instrumental solos.

She also tackles Radiohead, an artist whose songs actually sound great reimagined as bluegrass numbers. In “The Tourist,” a collaboration with former Nickel Creek singer Chris Thile, Jarosz’s stripped-down voice builds into a dark, tortured lament made all the more striking by Thile’s harmony, shimmering mandolin, and whining fiddle.

I asked Jarosz if Radiohead’s Thom Yorke had responded to her version of “The Tourist.” “That would be amazing, but it’s kinda like, I don’t really do it for that,” she says, smiling. “If he said something that’d be awesome, but it’s more about just honoring his artistry.”

Jarosz’s fluidity with different styles serves her well in college, where she participates in World and Klezmer ensembles and recently started paying more attention to jazz. Despite her myriad musical influences, Jarosz’s voice only gets more unique and defined over time. “After being forced to do those different styles, when I come back to my own style, it’s made it stronger,” she says. At this stage in her career, her willingness to push herself and draw inspiration across genres is a gift perhaps even more valuable than her sheer musical talent.