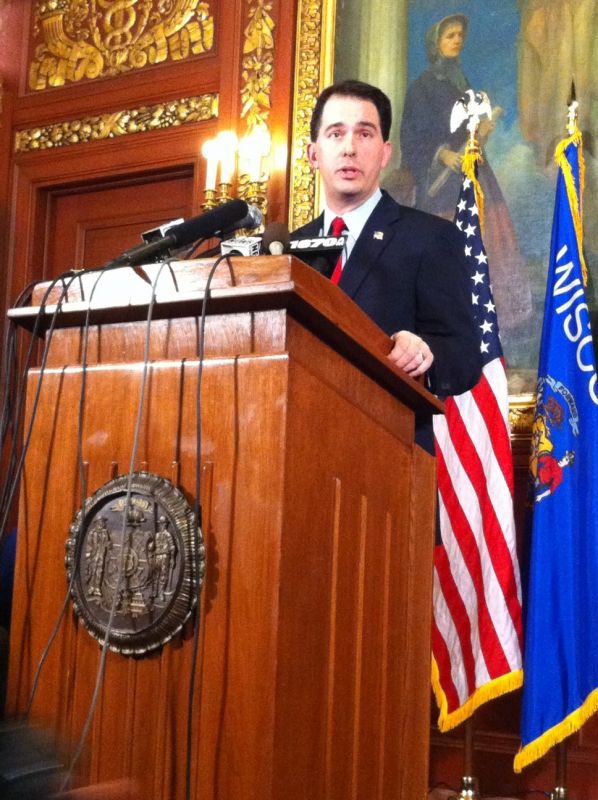 Even Wisconsin Republican Governor Scott Walker’s home redecorating plans have caused an uproar. In his first six months in office, Walker sparked a national controversy by trying to curb collective bargaining rights for most public-sector unions, not to mention slash education funding and social and health services for his state’s citizens. Now, Walker has made headlines again after he removed a painting depicting three Wisconsin children—one had been homeless, one came from low-income family, and a third who had lost family members in a drunk-driving accident. According to the Milwaukee Journal Sentinel, the painting was one of numerous pieces of art commissioned by the fund that operates the governor’s mansion—works that were intended to remind the governor of the constituents he or she represents.

Here’s the Journal Sentinel on the painting by artist David Lenz:

In an interview, Lenz said he carefully selected the three children portrayed in “Wishes in the Wind.” The African-American girl, featured in a Journal Sentinel column on homelessness, spent three months at the Milwaukee Rescue Mission with her mother. The Hispanic girl is a member of the Boys & Girls Clubs of Greater Milwaukee. And the boy’s father and brother were killed by a drunken driver in 2009.

“The homeless, central city children and victims of drunk drivers normally do not have a voice in politics,” Lenz explained in an email. “This painting was an opportunity for future governors to look these three children in the eye, and I hope, contemplate how their public policies might affect them and other children like them.”

He added: “I guess that was a conversation Governor Walker did not want to have.”

A Walker spokesman insisted that the replacement of Lenz’s work with a Civil War-themed painting depicting a bald eagle was not a criticism of the painting. The spokesman said the Lenz painting was likely going on loan to the Milwaukee Public Library.

By ditching Lenz’s painting, Walker has taken a page from Maine’s Republican Governor Paul LePage. This spring, LePage demanded that a union-friendly mural inside the state’s Department of Labor be removed because it wasn’t pro-business enough for his liking. The decision outraged Democrats, labor unions, artists, and many more, and the US Labor Department told LePage to either put the federally-funded mural back in its place or return the work to the federal government. Currently the mural remains in limbo; three lawyers have filed a restraining order demanding LePage reverse his original order.

A trustee for the library connected Walker’s anti-union bill with the painting brouhaha. “This is indicative of [Walker’s] tone-deafness,” the trustee, John Gurda, said. “My point of view is this is not the Walkers’ house, this is Wisconsin’s house. This was commissioned by an organization that was there long before Scott Walker came in and will be there long after he is gone.”