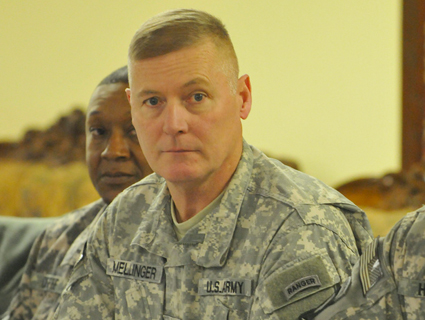 This summer, the US military will finally become an all-volunteer force.

Sure, technically, America’s armed forces have been considered voluntary since the draft was abolished back in 1973. But Command Sgt. Major Jeffrey Mellinger puts the lie to that: He is the last Vietnam-era draftee still serving in the military these many decades later. That will change in a few months, when he retires from the Army after 39 years in uniform.

“Draftees are pretty maligned over time,” he told the AP, “but the fact is they are part of every branch of service up to 1973, and when you look at what those military branches accomplished over time, I’ll let the record speak for itself.” The Army obviously life agreed with Mellinger, whose face is ubiquitous in military public affairs photos. In 2007-8, he served as David Petraeus’ senior enlisted adviser with the US coalition in Baghdad, and he recently served a similar role in Afghanistan.

But Mellinger’s high-profile successes and enthusiasm for regimentation weren’t experiences common to many US conscripts. And in recent years, between stop-loss orders, multiple deployments, and the plucking of reservists and guardsmen for active duty, many “volunteer” service members have had to make big involuntary sacrifices reminiscent of the lottery days. These sacrifices have fallen disproportionately on less affluent Americans who are more likely to volunteer for service. They’ve also contributed to a yawning gap in civil-military relations, which is why Rep. Charles Rangel (D-N.Y., and himself no great advertisement for upright selfless sacrifice) keeps trying to revive the draft every year.

Strange, isn’t it? Left-leaning politicians now seeing social benefits in reviving a government practice whose abolishment was once the raison d’etre of the left? But Rangel’s not alone in thinking that an equally applied service requirement could make Americans more circumspect about the use of force in general. It could be an interesting fix for continued unemployment, too. Mellinger recalled his own experience after getting an induction letter from Uncle Sam:

Mellinger told the draft board there was a mistake.

“I…told them I don’t need to go into the Army, I’ve got a job,” said Mellinger, who hung drywall for a living. “They just kind of laughed.”

What do you think? Could a 21st century draft bring about a more humane, civic-minded American electorate, or would it just provide a new heavy-duty outlet for Jingoism™? Drop us a line in the comments. And in the meantime, hear Mellinger in his own words: