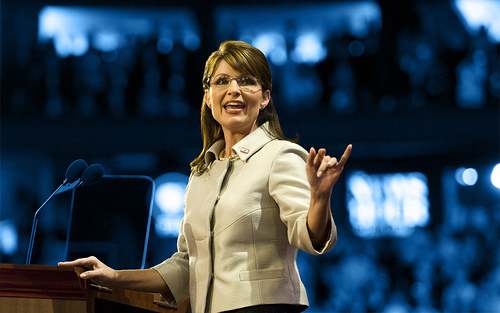 Is Sarah Palin still boning up on the European debt crisis? The latest federal filings for her political action committee, Sarah PAC, show that an incendiary, right-wing Dutch journalist who was giving her pointers on the matter is still on the payroll.

In the first half of 2011, Sarah PAC paid $24,000 to Paideia Research LLC, a consulting outfit run by Joshua Livestro. Once a frequent contributor to Conservatives4Palin, a website co-founded by Palin aide Rebecca Mansour, Livestro was originally hired by Palin’s team to brief Palin on Europe’s financial crisis.

Of course, Livestro’s name isn’t anywhere to be found in Sarah PAC’s filings. Last year, it took quite a bit of digging by Daniel Schulman and myself to connect Livestro to Paideia:

Two recent federal filings for SarahPAC list a Sheridan, Wyoming, address for Paideia Research. When one local blogger visited the address, he found a low-slung, non-descript building that’s home to Sheridan Answering and Secretarial Services, a company that handles phone calls and mail for customers. (Other bloggers soon started asking questions about Palin’s mystery research firm.) When asked by Mother Jones about Paideia, Sheridan Answering’s owner, Ginger Horton, replied, “I have no idea who they are.”

Wyoming business records show that Paideia was incorporated in July. In addition to the local Wyoming address, these records list another in southern California. That address, in turn, traces to another mail forwarding service. Paideia’s corporate filings also indicate that it is managed by Pyramid Management LLC, which belongs to a California-based ex-lawyer and realtor, David DeLoach, who specializes in setting up untraceable LLCs and pre-fab shell companies in Wyoming and Nevada—states that don’t tax corporate income and have exceedingly lax disclosure rules.

In a brief phone interview, DeLoach said he vaguely remembered setting up Paideia. But as his website promises, the entire process was confidential. He said he himself didn’t know who was behind Paideia or why it was created.

So it appears the owner of Paideia truly wanted to keep its origins secret. And he might have succeeded, had Karen Wheeler, the Wyoming Secretary of State’s business compliance director, not told Mother Jones that she had recently spoken to Paideia’s owner by phone. She didn’t get his name, but said he “had quite the English accent” and told her he was based in England.

That England-based mystery man turned out to be Livestro, who cut his teeth in Dutch politics and founded the Edmund Burke Foundation, a think tank devoted to countering Dutch progressive politics. He also had a knack for sparking controversy: In a Dutch magazine, Livestro once dismissed the abuses at Abu Ghraib as no worse than those that might occur within a fraternity, and he called critics of that prison “cry-babies.” Oh, and he’s also a climate change denier.

Even before Sarah PAC hired him, Livestro was an avid fan of the former Alaska governor. He defended her against criticisms from around the blogosphere on the site Conservatives4Palin, a hub of pro-Palin commentary. And then there’s the bio on Livestro’s website, which reads: “His greatest wish is to work for the 2012 Sarah Palin presidential campaign.”