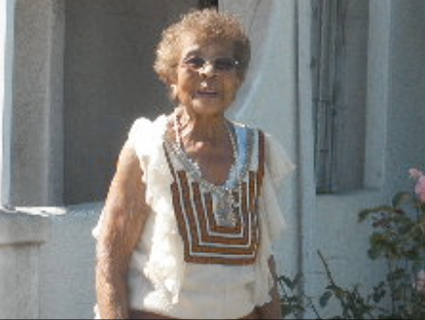 There is a term of art that was often used during the mortgage boom: “I’ll be gone, you’ll be gone,” or “IBGYBG.” In the mortgage business, it meant that however bad or risky or outright fraudulent a mortgage was, the person who originated it didn’t have to worry—he’d have sold it and moved on long before the borrower was the wiser. The people to whom broker sold the mortgage wouldn’t be held responsible, either—after all, they weren’t responsible for the fraud.

Lillie Mae Washington, who is 96 and lives in West Los Angeles, knows all too much about IBGYBG. Since September 2008, when Washington first sued her mortgage servicer, lender, escrow agent, and others for mortgage fraud, she has been trapped in a legal hell. She has represented herself, been represented pro bono, and now pays a lawyer to handle her case. The suit has been handled by at least seven judges, and the docket runs 104 documents long in federal court alone.

In all that time, no one that Washington has sued has argued that her mortgage was entirely by-the-book. It’s just that no one cares that it probably wasn’t.

That includes Ocwen, Washington’s mortgage servicer, which she says has been trying for over a year to evict her from the home where she has lived for nearly four decades. Washington paid Ocwen—a giant company that services hundreds of thousands of mortgages in all 50 states, often on behalf of big Wall Street banks that hold the mortgages—as long as she could afford to, but the payments were more than three times higher than what she expected when she signed the mortgage documents. A judge’s mediation order temporarily stopped Washington from being kicked out late last month, but her lawyer is far from confident that she won’t be asked to leave again.

Many of the original defendants in Washington’s case are now either insolvent or out of business—in short, they’re gone. But the documents in Washington’s case make it clear that the defendants believe they can’t be held responsible for fraud at mortgage origination. Mitch Abdallah, Washington’s latest lawyer, doesn’t see it that way. “Once you’re responsible for a bad act,” he says, “you can’t wash your hands of the taint by simply signing the dirty document to someone else.”

Washington’s story starts the way many similar tales of alleged mortgage fraud do: with a call from a salesman.

In October 2006, a representative from a company called Home Loans Direct called Washington’s home and arranged an appointment to visit. Washington’s son Hobert, who was a co-owner of the house, had already signed the mortgage separately, without Lillie Mae’s knowledge. Hobert Washington was suffering from Alzheimer’s, and his “cognitive impairment would have been immediately visible and obvious to anyone who spoke and interacted with him,” according to court documents. Hobert had incontinence problems, an eye that bulged out of its socket, and fell frequently, says his brother, Bobby Washington.

Hobert “invited the lenders into her home,” Abdallah says. “The son suffered from Alzheimer’s, so he wasn’t in the best of shape to be giving advice or counseling his mother. They sat down and offered her a loan that she probably shouldn’t have taken and was filled with representations that aren’t accurate.”

According to court filings, the salesman came to Washington’s house and promised that she could get a fixed-rate loan at “about 6 percent,” pay “no more than $700 a month,” and even get $80,000 for repairs. He said the payments would not start for six months. Washington signed on the dotted line.

According to legal documents, the loan agent had Washington sign a standard mortgage form without even showing her key documents that outlined information on how much she was borrowing, how much interest she’d be paying, and how much her payments would be.

Perhaps Washington was foolish to rely on the salesman’s verbal representations, but federal law is clear. It requires that disclosures about mortgage terms be made “clearly and conspicuously,” “grouped together,” “in writing,” and “in a form the consumer may keep,” all “before consummation of the transaction.” Washington alleges that the disclosures made to her failed to meet many of those conditions.

Home Loans Direct, the company that allegedly sold Washington the mortgage, no longer has a real estate license. It surrendered the license in 2008 during a state investigation, according to records from the California Department of Real Estate. In addition, one of the company’s officers, Jorge Ricardo Cruz, had his license suspended and later revoked. A California Department of Real Estate document [PDF] obtained by Mother Jones explains that Home Loans Direct surrendered its license after deciding not to contest allegations that it:

knowingly advertised, printed, displayed, published, distributed, or caused or permitted to be advertised, printed, displayed, published, distributed, statements or representations with regard to the rates, terms, or conditions for making, purchasing, or negotiating loans on real property which were false, misleading, or deceptive.

The Home Loans Direct salesman promised to send copies of the mortgage documents to Washington after she signed. But when Washington’s son Bobby called the firm to follow up, he got two unsigned notes in the mail, promising that the Washingtons would be able to “recast the loan to a more comfortable payment” in six months and that “everything will be alright.”

Needless to say, the loan wasn’t what Lillie Mae thought it was. That November, Lillie Mae and Bobby were celebrating Thanksgiving with family upstate when a call came in from Hobert’s ex-wife, who was caring for him. “She said, ‘Sit down,'” Bobby recalled. “‘Your payment is due next month and it’s $2,582.29.’ It ruined the whole weekend.”

When the Washingtons finally received copies of the loan paperwork in late November, they realized they’d been screwed. The interest rate was actually over 9 percent, and the loan was adjustable—later, the rate would could climb to nearly 12 percent. The Washingtons would get $95,909.25 in cash out, significantly more than the $80,000 they had been promised. The final loan documents also included a form from a notary attesting that Hobert and his mother had appeared before her together. Washington says she never saw a notary and has never been to Hacienda Heights, where the notary was registered. (Attempts to locate the notary were unsuccessful.)

“They came and took advantage,” Bobby says. “They played this game of lies.”

Most of the defense lawyers involved with the case didn’t return calls and emails asking for their clients’ side of the story. Brent Kramer, who represents Ocwen and several other defendants, referred me to the documents available in the case and otherwise declined comment.

Selling mortgages to low-income borrowers based on a misleading monthly payment was a common practice during the mortgage boom, says Prentiss Cox, a law professor at the University of Minnesota who is an expert in mortgage fraud. “Sales tactics were highly aggressive and the terms of the loans were complex and confusing,” Cox says. “It was almost always someone coming to them, promising them lower monthly payments, and then giving them a mortgage that had hard-to-understand back-end costs. The monthly payment didn’t reflect the true long-term cost of the loan.”

The Washingtons, panicked and confused about their rights, searched high and low for a way out. Bobby, who worked in a nonlegal capacity at a big law firm in Los Angeles, asked his colleagues for help. Lillie Mae sent a letter to the mortgage company disputing the terms of the loan. In the meantime, the Washingtons decided to use the cash out to pay their mortgage bills.

Bobby’s coworkers told him he and Lillie Mae had at least 10 different federal and state causes of action. They passed his case on to another big downtown law firm, which took the case pro bono but didn’t actually file suit until September 2008. Meanwhile, things were only getting worse for the Washingtons. Ocwen denied a request to cancel the loan based on fraud at origination. The Washingtons continued to drain the cash-out money to pay their bills. In October 2009, the Washingtons ran out of money, and they stopped paying the loan. A month later, Hobert Washington was dead, and Lillie Mae was on the hook for the entire loan.

Lillie Mae and Bobby Washington want to stay in their home. “It’s not modern but it’s home,” she says. “You’ve got a roof over your head at least, got a yard you can go out in. I’m just trying to keep everything under control.”