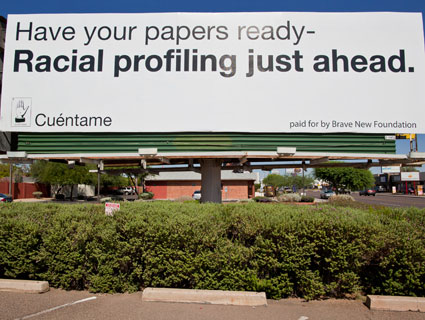 Now that the Justice Department has battled the state of Alabama in court to block implementation of HB 56, the immigration bill that mirrors Arizona’s controversial SB 1070 (PDF), it seems like as good a time as any to look at how the two measures, well, measure up. Which Republican-proposed legislation out-hypes, out-muscles, and out-bans the other?

Restrictions: Passed in April 2010, SB 1070 was the first in a series of tough state laws that sought to deal with illegal immigration in the absence of federal immigration reform. The bill’s key components included making it a crime not to carry one’s immigration documents and giving police wide-reaching power to detain anyone suspected of being in the country illegally—both of which were blocked by federal Judge Susan Bolton just months after the legislation’s passage. (SB 1070 also made it a state crime to be in the United States illegally.)

HB 56 was signed into law by Alabama Gov. Robert Bentley on June 9. Like SB 1070, it requires police to try to determine a suspect’s immigration status during the course of a lawful “stop, detention, or arrest”—given a “reasonable suspicion” that the person is an immigrant. But that’s just the beginning: The legislation also bans undocumented immigrants from receiving state or local public benefits; keeps them from enrolling in public colleges; bars them from applying for or soliticing work; outlaws harboring and transporting undocumented immigrants; forbids renting them property or “knowingly” employing them within Alabama; calls for a citizenship check during voter registration; requires all state businesses to use the federal E-Verify system when hiring; and, if that wasn’t enough, asks officials at public K-12 schools to determine the immigration status of their students.

Number of People Affected: According to a February report from the Pew Hispanic Center (PDF), in 2010 there were an estimated 400,000 undocumented immigrants living in Arizona, which shares a 370-mile border with Mexico and is a key crossing site for would-be migrants. (That’s about 6 percent of the state’s population.) Alabama, on the other hand, was home to an estimated 120,000 undocumented immigrants—nearly 100,000 more than in 2000 but still just 2.5 percent of all state residents.

But these laws don’t just affect the undocumented—racial profiling is a real risk. Whereas 67 percent of Alabamians identified themselves as non-Hispanic whites in the 2010 census, 57.8 percent of Arizonans did so. Nearly 30 percent of Arizona census respondents self-identified as Hispanic or Latino.

Edge: The South has become a popular destination for Latin American immigrants in recent years, but this one ain’t close. We’re even at 1.

Legislative Sponsors: Where to begin with Arizona state Sen. Russell Pearce? The first Arizona legislator to be recalled has a bit of a track record: In 2006, he called for the renewal of a ’50s-era deportation program known as Operation Wetback; last year, he tried to roll back birthright citizenship.

His Alabama counterpart, state Sen. Scott Beason, also has a way with words. Not only has he taken heat for saying that politicians should “empty the clip” on immigration issues, but the Birmingham NAACP has called for Beason’s resignation after some choice comments about African Americans (he called them “aborigines”) were played in a bingo corruption trial.

UPDATE, 1:04 p.m. PST: Federal Judge Sharon L. Blackburn has decided that she needs more time to rule on HB 56 and has pushed back implementation of the bill until September 29. The legislation was originally set to go into effect on September 1. Alabama Gov. Robert Bentley had this to say in a statement: “I look forward to the Judge ruling on the merits. We have long needed a tough law against illegal immigration in this state, and we now have one. I will continue to fight at every turn to defend this law against any and all challenges.”