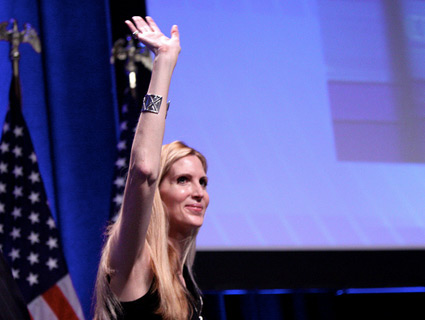 Ann Coulter has been tapped as the honorary chair for the advisory council of GOProud, a national advocacy organization for staunchly conservative LGBT individuals.

In a Tuesday press release, GOProud announced that Coulter has enthusiastically accepted the honorary position, and that her official title on the council will be “Gay Icon”:

“Ann Coulter is a brilliant and fearless leader of the conservative movement, we are honored to have her as part of GOProud’s leadership,” said Christopher Barron, Chairman of GOProud’s Board. “Ann helped put our organization on the map. Politics is full of the meek, the compromising and the apologists – Ann, like GOProud, is the exact opposite of all of those things. We need more Ann Coulters.”

Coulter responded by saying that she was thrilled to assume the role of “Queen of Fabulous.”

It’s only natural at this point to quickly review a few things about Ann Coulter:

In her unwavering support for Don’t Ask, Don’t Tell, Coulter suggested that perhaps there should be an all-homosexual service, decked out with the flashy stereotypes of “a dance club, a cosmo bar and a counseling center called ‘The Awkward Place.'” She also wrote that there is “no proof that all the discharges for homosexuality involve actual homosexuals.”

Coulter claims to be a “friend of the gays” while simultaneously saying that leftists are using them (and the blacks and the feminists and the single mothers) to “destroy the family” with the “made-up” concept of marriage equality.

For the 2008 presidential election, she full-throatedly endorsed GOP candidate Duncan Hunter, whose stance on gay rights can be accurately summed up in his vote to ban gay adoptions in Washington, DC.

Oh, and in 2007 she famously declared John Edwards a “faggot” to a chorus of CPAC applause, so, yeah, there’s that.

(She also joked about how Al Gore was a “total fag,” but, to be fair, that one can just get chalked up to her terrible comic timing.)

But Coulter’s GOProud appointment will only seem bizarre to those who know absolutely nothing about GOProud.

The organization, though branding itself as a gay rights group, generally views gay marriage as a states’ rights affair—a stance famous for working out awesomely for interracial couples in Alabama before the mid-’60s. (Incidentally, Coulter also maintains that she was the one who convinced GOProud to “[drop] the gay marriage plank.”)

GOProud executive director Jimmy LaSalvia, along with viewing federal hate crimes legislation as a waste of “so much political capital,” spends nearly as much time and energy trashing Barack Obama as a “failed president” as he does being an apologist for homophobic right-wing politicos.

As a result of their agenda, GOProud has earned plenty of resentment from other gay rights groups, with columnist Dan Savage emphatically describing them as “gay Quislings and useful idiots that help to window-dress the Republican Party, which is…still rabidly anti-gay to its core.”

So really, Ann Coulter and GOProud seem perfectly made for each other. This latest announcement is about as surprising as, say, the news that GOProud got booted from next year’s CPAC.