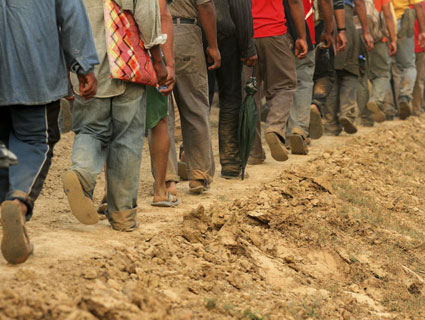 Indigenous Bolivians march to protest the building of a road through a national park.Max Torranzos/DPA/ZUMAPRESS.com

With his Aymara heritage and anti-imperial outlook, Evo Morales has often been portrayed as one of the developing world’s leading voices on global warming. Back in 2009, the Bolivian president shook the Copenhagen climate change summit when he blamed rising temperatures on capitalism and suggested that, without drastic changes, Africa would “suffer a holocaust.” In December, at a conference in Mexico, he said governments that avoided emissions reductions would be guilty of “ecocide.”

But lately environmentalists and indigenous groups have been calling Morales a hypocrite, claiming his ecofriendly talk doesn’t jibe with his government’s recent record on fossil fuel exploration and mining-related pollution. And now, with the government in the midst of a road project that eventually will cut right through a national park, the protests have ramped up. On August 15, indigenous residents of the Isoboro-Sécure National Park and Indigenous Territory (TIPNIS) began a 300-plus-mile protest march from the Amazonian lowlands to La Paz.

The nearly 200-mile highway will link the central department of Cochabamba with the country’s Beni region in the Amazon. While the government says the road is an important development project that will cut transportation time in half and allow for easier access to Beni (and its resources) from the western highlands, the director of Bolivia’s national park service has said that building a road through TIPNIS would cause “the greatest ecological destruction in Bolivia’s history.” (Some 15,000 indigenous people live alongside 3,000 plant species and 11 endangered animal species in one of the world’s most biodiverse regions.) One report claimed that within 18 years, 64 percent of the park would be deforested because of the road.

According to the Christian Science Monitor, “Some leaders from TIPNIS are particularly worried the road will facilitate colonization of the area by Bolivians from the country’s western highlands and oil exploration by the Bolivian government in the area, a move the government has not discounted.” And as NACLA’s Emily Achtenberg reported, that’s not their only concern:

As community leaders explain, the problem is not the road itself but the access it will facilitate by interests hostile to conservation. These include illegal loggers, cocaleros using slash-and-burn agriculture to maximize production for the illegal market, and narcotraffickers. The community has clashed repeatedly with such groups in the past, and last May burned down 40 shacks associated with a land invasion that had destroyed the surrounding forest.

(That the road is predominantly funded by $415 million loan from the Brazilian government—and is being built by a Brazilian conglomerate, OAS—hasn’t helped matters either.)

For his part, Morales has brushed off critics. In June he was defiant, telling the “so-called defenders of the environment that whether they like it or not, we’re going to build this highway.” On Sunday, citing phone records that he claimed show calls between the US Embassy and the indigenous leaders of the march, Morales lashed out on state television: “It’s a strategy of imperialism—and the United States, through its agencies—to prevent national integration and provoke a confrontation between the people of western Bolivia and those from the east.”

But not everyone is buying the president’s framing. As Rafael Quispe, the leader of the influential CONAMAQ indigenous group, told the Associated Press: “Morales isn’t a defender of Mother Earth. His rhetoric is empty.”