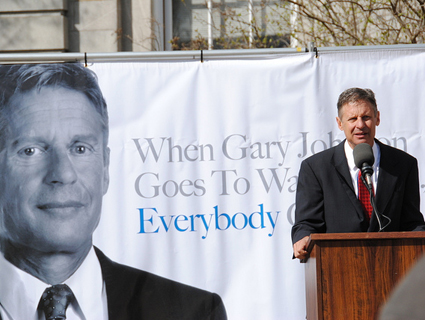 The race for the Republican presidential nomination does not appear to be going well for Gary Johnson. According to the most recent Zogby poll, the libertarian former two-term New Mexico governor, climber of Mount Everest, and consumer of medical marijuana is polling at 1 percent among likely GOP presidential primary voters nationwide. That’s 24 points behind front-runner Rep. Michele Bachmann (R-Minn.); 10 points behind fellow libertarian Rep. Ron Paul (R-Texas); and 1 point behind former Speaker Newt Gingrich, who at this point is basically just trying to sell more copies of his books. Johnson is trailing Fred Karger, the gay former dark-arts operative who is running solely for the sake of hounding Mitt Romney, by 1 point.

But if you ask Gary Johnson, he is exactly where he wants to be. “The vantage point that I have is the only vantage point that I’ve ever had in politics, which is being last,” Johnson explained on Friday following an address to the National Conference of College Republicans in downtown Washington. “I’ve run for two political offices in my life: governor of New Mexico, and reelection as governor of New Mexico. This was just where I was in New Mexico.”

Johnson was in town last week for some fundraising and glad-handing. He met with South Carolina Sen. Jim DeMint, the tea party’s best friend in Congress, on Thursday, and spoke to the College Republicans the next morning. But despite being excluded from the first New Hampshire presidential debate, Johnson believes things are starting to look up.

“You need to understand yourself whether or not you have momentum,” Johnson says. “If you can’t ascertain that, why, that’s kind of the key to life. You can’t kid yourself: Either you have it, or you don’t have it. And exceeding expectations would be exceeding what people are expecting of you.” And does Johnson have momentum? “Oh, yeah. I’m not expecting anyone to know that, and I don’t want to sound silly for saying that’s something that I have when others wouldn’t acknowledge it at all, but again this is very corollary to having run for governor of New Mexico. The primary was in June of 1994. In February they did a poll in New Mexico, asking who would you vote for on the Republican ticket? And I got 2 percent of the votes. We were ecstatic.” Johnson’s not sure what those expectations will be, but he suggests that somewhere in the top four in libertarian New Hampshire would be a start. His plan is to focus all of his energy on the Granite State for the next 6 1/2 months, skipping, for the most part, Iowa’s first-in-the-nation caucuses.

It’s a war of attrition. “There are 128 candidates on the Republican side of the ticket right now,” Johnson says, fudging the numbers just a tad—and no one else is talking like him. It’s only a matter of time before people figure that out.

“You need to understand yourself whether or not you have momentum. If you can’t ascertain that, why, that’s kind of the key to life.”

Johnson’s political views overlap with Republicans and Democrats in a way that makes him an imprecise fit for either—he’s mostly pro-choice (except for late-term abortions) and anti-war (unless we’re being attacked); he’d also like cut entitlement spending by about 40 percent in the short term and eliminate gun regulations. And then there’s the economy. While Romney has stayed noticeably silent on the debt ceiling, Johnson is taking a hardline approach: “I would not raise the debt ceiling. I think, you know for all the talk about balancing the budget and for all the talk about not printing money, this isn’t a mechanism to make that happen. And I do not want to downplay the problems associated with not raising the debt ceiling, but I just think that those problems will end up paling in comparing with the monetary collapse of this country.”

Johnson’s fear, ultimately, is that the United States is careening toward a full-scale monetary collapse that will make the consequences of not raising the debt ceiling seem trivial. So what exactly would that collapse look like? Are we talking survival seed banks? Yes. “That’s ultimately what you’re looking at. What it looks like is needing a wheelbarrow full of money to buy a loaf of bread.” He offers to show me the Zimbabwean million-dollar bill he keeps in pocket at all times. “The monetary collapse is when the United States steps in and prints money to cover their entire obligation. Recently that number has been as high as 70 percent, printing money. It’s not a great outlook, and to me it’s just the writing on the wall.” If you imagine America turning into some sort of combination of The Hunger Games and Weimar Germany, slashing Social Security by 40 percent, as Johnson proposes, suddenly doesn’t seem like such a big deal.

The governor has a knack for spin that’s requisite for any candidate for higher office, but he’s also got less of a filter, and is noticeably exasperated at some his competitors’ antics. For instance, he thinks Herman Cain’s fixation on the threat of Islamic Shariah law—and perhaps Herman Cain himself—is a waste of time. “I don’t see it happening,” he says. “I’ve never seen or smelled a whiff of it. It’s a nonexistent issue as far as I’m concerned. And when Herman Cain answers the first question at the South Carolina debate about what he would do in Iraq and Afghanistan by saying he would consult with his advisers, gosh.” Ditto for the party’s focus on social issues—the Iowa Family Leader’s anti-gay-marriage pledge, he says, “is the reason why the world doesn’t like Republicans.” I asked about the rise of China, which has prompted some tea partiers, including Rep. Allen West (R-Fla.), to call for an arms race. “When people understand that the United States spends 52 cents out of the worldwide dollar on military spending and that China spends 9 cents, what arms race are we gonna engage them in? I mean really, is China a threat? No, they’re not.”

The Iowa Family Leader’s anti-gay-marriage pledge, Johnson says, “is the reason why the world doesn’t like Republicans.”

While Johnson says he respects Texas Gov. Rick Perry, a likely 2012 foe, he says America’s not ready for another Texas governor and he doesn’t think Perry’s August 4th prayer rally is such a great idea. “I think events like that alienate a whole lot of people that don’t have to be alienated. If it’s a personal kind of situation that I’m leading by example holding this prayer vigil, that’s one thing, but if it’s somehow political, I don’t think people really like Republicans who are doing that publicly, linking that to public policy.”

As for his support for marijuana legalization, the issue that defined his second term as governor (when Drug Czar Barry McCaffrey called him “anathema to America’s parents“), Johnson isn’t backing down. “We’re two years away from being at a national statistical tipping point,” he says. “So this is the kind of an issue that, and I’m just gonna state the obvious, does really well when people talk about it. The more information that goes along with this issue, the better it does.” (Two years would of course push the tipping point beyond the November election). That support for legalization echoes the larger philosophy he’s basing his candidacy on:

Although he doesn’t think anyone else in the GOP field is presidential material, Johnson says he won’t consider voting for Obama, and he’s not entertaining the idea of running as an independent or on a third-party ticket (as Paul once did). “Absolutely not. The idea here is to win, and I don’t win as a third-party candidate. The only candidate that comes to mind that might be a formidable role in a third-party role would be somebody like [New Yor City Mayor Michael] Bloomberg, who could put a kajillion dollars of their money into doing that.” And anyway, he’s got a pretty good backup plan if, as the polls suggest, he falls flat in New Hampshire.

“I’ll go back to living north of Taos. I live there because the skiing there is as good as anywhere on the planet and that’s my passion. So I’ll just go back to adventuring and athletics.” Adventuring is Johnson’s term for various pursuits, including mountaineering (up Mount Everest in 2003) and paragliding (which left him severely injured in 2005 and led him to a three-year trial run of medical marijuana). I asked him about his hometown’s other claim to fame: a paranormal phenomenon known as the Taos hum—a low pitched drone that feels, as one Taos resident once told me, “like being able to hear the mountains.” Does Johnson feel The Hum?

“Oh totally. All the time!” He clarifies, at this point, that he’s being tongue in check, and not simply off his rocker. But then he starts to hum loudly. “Have I ever heard it? Yes.”