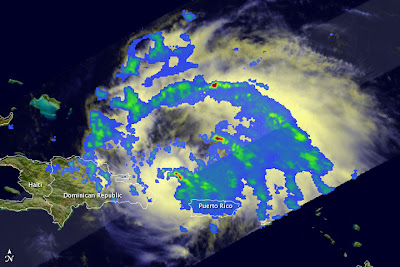 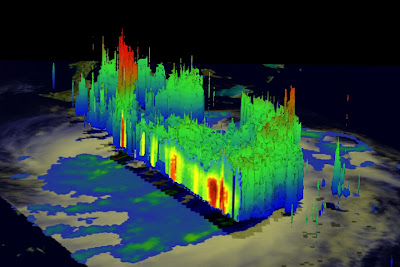 NASA’s Earth Observatory posted these gorgeous views of Hurricane Irene today. Both were captured by the Tropical Rainfall Measuring Mission (TRMM) satellite, which passed directly over the storm at 15:57 UTC on 22 August 2011. At the time, Irene was a Category 1 hurricane with maximum sustained winds of 70 knots/130 kilometers/80 miles per hour.

From the Earth Observatory caption:

The top image shows a top-down view of the rain intensity within the storm. TRMM reveals that although a hurricane, Irene has not yet developed an eye and is not yet fully organized… Rainbands, containing light to moderate rain (shown in blue and green, respectively) curve around the storm mainly to the north and east of the center, revealing the presence of the storm’s low pressure circulation, but one that is not yet intense. The lower image, taken at the same time, provides a three dimensional perspective of the storm. It reveals an area of deep convection (shown in red) near the storm’s center where precipitation-sized particles are being carried aloft. These tall towers are associated with strong thunderstorms responsible for the area of intense rain near the center of Irene seen in the previous image. They can be a precursor to strengthening as they indicate areas within a storm where vast amounts of heat are being released. This heating, known as latent heating, is what is drives a storm’s circulation and intensification.

Irene originated from a tropical wave that propagated off the west coast of Africa to become the 8th named storm of the season. Her formation date of August 20 ties this year with 1936 as the second earliest date for formation of the season’s 9th storm. Furthermore, as Jeff Masters writes at his Wunderblog:

Hurricane season is only one-third over, and we’ve already had almost a full years’ activity already. Tropical Storm Irene is the 9th named storm this year, and an average season has just 10-11 named storms… Only 2005 was more active this early. However, the first eight storms of the year have done far less damage than is typical. All eight storms stayed below hurricane strength, making 2011 the first hurricane season since record keeping began in 1851 to have more than six consecutive tropical storms that did not reach hurricane strength. As I discussed in Friday’s post, a major reason for this is the lack of vertical instability over the tropical Atlantic so far this year. We’ve had a large amount of dry, sinking air over the tropical Atlantic, and the usual amount of dry, dusty air from the Sahara, both helping to keep the atmosphere stable and stop this year’s storms from intensifying into hurricanes.

Irene however is growing fast and big—you can see her enormous diameter in the image above—and is threatening to become this year’s 10th billion-dollar disaster.

In the image above you can see some of what is likely to fuel Irene on her northward path in the next few days—extremely warm waters, up to or above 30°C/86°F, through the Turks and Caicos and the Bahamas, all the way up the Gulf Stream to Cape Hatteras.