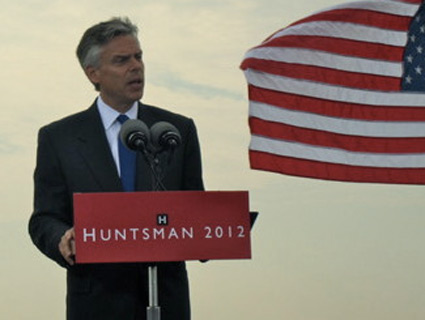 Though Texas Governor Rick Perry did not attend Thursday’s GOP debate in Iowa, he wasn’t the only presidential candidate who seemed noticeably absent from the proceedings: Jon Huntsman was MIA, too. Huntsman was physically present, of course, but the Huntsman from the start of the campaign barely made an appearance, especially when it came to addressing Mitt Romney’s record.

By mid-July, the only person Huntsman seemed to take more swipes at than his former boss (i.e., Barack Obama) was Mitt Romney. During a campaign stop in South Carolina, Huntsman delivered this passive-aggressive critique of Romney’s unimpressive job creation credentials:

When you look at the absolute increases in job creation, Utah led the United States in job creation. That compared and contrasted with other states — say, Massachusetts, I’ll just pull that out randomly — not first, but 47th.

The Huntsman campaign followed up by stating that Massachusetts’s job growth under Romney was “abysmal by every standard,” and that “we assume…Romney will continue to run away from his record.” Later that month, Huntsman—who had come out with an unambiguous endorsement of John Boehner’s debt bill—was hugely critical of Romney’s silence and bet-hedging on the debt ceiling crisis, saying that “to dodge the debate or to wait until the debate is over effectively and to take a side, I don’t consider that to be leadership.”

But during the Fox News debate Thursday night, Huntsman chose not to land a single direct blow to his opponent’s economic policies or leadership skills. The closest Huntsman came to actually going after Romney was his repetition of the “some people run away from their record” line, but even that wasn’t explicitly targeted at any one candidate on stage.

Considering how badly Tim Pawlenty folded to Romney during the last Republican debate—backing away from the well-publicized “Obamneycare” jab—it would have been refreshing to see the GOP “frontrunner” meaningfully challenged in a public forum right before the Ames Straw Poll.

Whatever negatives there are about Huntsman (his not-quite-sound environmentalism, the potential corporate skeletons in his closet, the atonal-ness of his new bandmates), last night’s debate did highlight his consistence and levelheadedness, especially when compared to candidates who wanted to, for example, “use Egyptian allies” to intervene in Libya during the Arab Spring. But with negligible poll numbers and a slender cash haul, the self-described odd-man-out had nothing to lose from reiterating his strong criticism of Romney’s executive tenure. So, it begs the question: Where exactly was the “real” Jon Huntsman during last night’s debate?