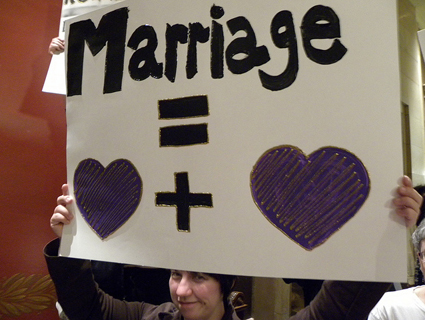 North Carolina Republicans are hoping to put a constitutional amendment to ban gay marriage on the 2012 ballot.<a href="http://www.flickr.com/photos/fibonacciblue/5728223962/sizes/z/in/photostream/">Fibonacci Blue</a>/Flickr

North Carolina has already banned gay marriage once, via statute, in 1996. Now, driven by concerns that a court might strike down the law, the state legislature is looking to do it again just to be on the safe side—this time by putting a constitutional amendment on the ballot in November 2012. House Majority Leader Paul Stam, a Republican, held a press conference on Tuesday to announce that the legislature would try to green-light the ballot initiative during September’s special session.

But that wasn’t the only thing he said. Via our friends at On Top, Stam attempted to justify his body’s focus on the issue by comparing gay marriage to incest and polygamy:

When asked by a reporter whether the amendment was “a reach of government into the individuals’ lives?” Stam answered: “Well 90 percent of all laws affect people’s lives, so that’s an argument without any content to it… We prohibit adult incest, we prohibit polygamy. What would be their answer to that? We’re involved in people’s lives. That’s a slogan without analysis.”

“What I’m saying is,” Stam went on to explain, “you cannot construct an argument for same sex-marriage that would not also justify philosophically the legalization of polygamy and adult incest.”

If the bill passes, North Carolina won’t be the only state to put gay rights on the ballot next November. Minnesota will vote on a constitutional amendment to ban gay marriage next fall—due, in no small part, to the efforts of Michele Bachmann’s allies at the Minnesota Family Council. The push comes at a precarious moment for both gay rights opponents and, more specifically, North Carolina. Gay rights activists scored a major victory this summer when New York Gov. Andrew Cuomo signed a law legalizing gay marriage in his state, and recent polls have shown a majority of Americans—and large numbers of Republicans—are supportive of gay marriage and civil unions. Even Focus on the Family president Jim Daly has had to concede that, at least demographically, the battle has been lost.

According to a February poll from Elon University, a majority of voters in North Carolina support at least some legal rights for gay couples. With Tobacco Road tilting increasingly into the blue column, 2012 might be conservatives’ last best chance to push through such a measure before liberal-leaning millenials and northeastern transplants implement Shariah. The fact that it might also help get out the vote for opponents of President Obama’s re-election campaign likely hasn’t gone unnoticed by the state GOP either.