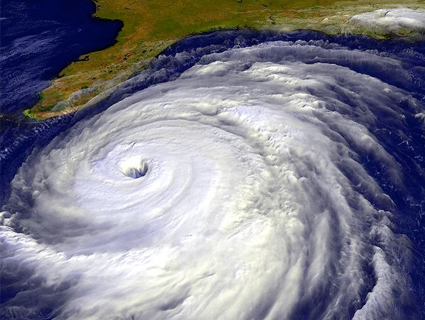 Could a “controlled” nuclear explosion disrupt a violent storm like Irene? Seems every time the United States is threatened by a big cyclonic system, somebody suggests lighting it up with a Fat Man or Little Boy; this week’s Irene-mania has been no exception. The Huffington Post takes notes of the suggestion that “dropping a nuke into the eye of the storm would heat the cool air and disrupt the convection current, thus subsiding the storm.” Okay, then.

In some sense, it’s natural that whenever a disaster strikes, people might hope that humankind’s highest and most destructive scientific achievement holds the solution. When the BP oil spill looked unstoppable, some commented that it could be plugged with a nuke; similarly, government scientists are currently studying whether atomic missiles could stop “killer asteroids” from exterminating life on Earth. (We’ll have more about that in an upcoming story.) So how about it? Could nukes possibly kill a tropical storm system too?

Sorry, but no, says the federal government. The National Oceanic and Atmospheric Administration’s Hurricane Research Division has, amazingly, researched the possibility. A post by the appropriately named meteorologist Christopher Landsea details two major problems with the bomb-a-storm theory:

The main difficulty with using explosives to modify hurricanes is the amount of energy required. A fully developed hurricane can release heat energy at a rate of 5 to 20×1013 watts and converts less than 10% of the heat into the mechanical energy of the wind. The heat release is equivalent to a 10-megaton nuclear bomb exploding every 20 minutes. According to the 1993 World Almanac, the entire human race used energy at a rate of 1013 watts in 1990, a rate less than 20% of the power of a hurricane.

The heat release from a fully developed hurricane is equivalent to a 10-megaton nuclear bomb exploding every 20 minutes.

In other words, not even a multiple-megaton A-bomb—a civilization killer—could effect much change in the weather. “Brute force interference with hurricanes doesn’t seem promising,” Landsea concludes.

Then there’s the other problem, which you probably intuited already:

Apart from the fact that this might not even alter the storm, this approach neglects the problem that the released radioactive fallout would fairly quickly move with the tradewinds to affect land areas and cause devastating environmental problems. Needless to say, this is not a good idea.

Scientists really have a knack for understating the salient facts.

Now, there’s one small caveat to all of this, and that’s the source: Landsea has come under fire from some circles for being a climate change skeptic, and he figures prominently in an anti-climate-change book called The Deniers. The charges seem unfair, though: What he actually says is that he’s not convinced global warming is causing bigger and more plentiful hurricanes, and he wants to avoid overstating the relation and doing further damage to climate change researchers’ credibility. Nevertheless, his principled stand reportedly made him a “politically reliable” public face for the Bush administration’s post-Katrina news push.

So take from that what you will. Even though Landsea’s physical calculations may be sound, and the notion of dropping a uranium/plutonium/cesium/tritium smorgasbord into the winds of a gargantuan storm cloud seems rather daft, prepare to hear some awesome conspiracy theories every time a tropical storm gets a name.