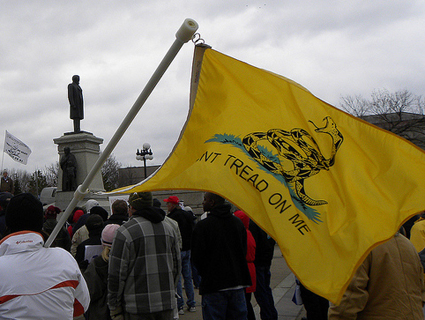 Snakes on the wane: The eastern diamondback rattler has lost 97 percent of its habitat.<a href="http://www.flickr.com/photos/fibonacciblue/5625165303/sizes/z/in/photostream/">Fibonacci Blue</a>/Flickr

Since the tea party movement rose to prominence in early 2009, the yellow “Don’t Tread on Me” flag has been a ubiquitous presence at everything from health care protests to campaign stops. It features the Revolutionary War-era slogan, along with a coiled rattlesnake, because, as Benjamin Franklin explained, the rattler “never begins an attack, nor, when once engaged, ever surrenders.”

But the flag doesn’t feature just any snake; it’s a eastern diamondback rattlesnake—and despite what the flag says, lots of people seem to be treading on its natural habitat. According to a new report from the Center for Biological Diversity, the species could be nearing extinction unless the federal government intervenes. Scientific American reports that the CBD, along with Protect All Living Species and the delightfully acronymed One More Generation, have petitioned the US Fish and Wildlife Service to classify the eastern diamondback rattlesnake as an endangered species. The rattler is down to 3 percent of its original habitat, and according to the CBD, its population has fallen from 3 million to 100,000. From the report:

“The eastern diamondback rattlesnake is a wildlife icon of North America,” said biologist Bruce Means, president and executive director of the Coastal Plains Institute, in a prepared statement. Means was also one of the petitioners. “Africa has its lion, Asia its tiger, and we can boast of this marvelous ‘Don’t Tread On Me’ snake. Like so many others, it’s a wildlife treasure that we must not allow to go extinct. Remaining habitat for the snake must be preserved, and negative public attitudes toward these nonaggressive animals must be reversed.”

But how will this sit with tea partiers? As my colleague Kate Sheppard has reported, many tea partiers view the Endangered Species Act as a tool of an overreaching federal government—if not something even more nefarious. In Florida, conservative activists are fighting to roll back manatee protection rules because they believe the regulations are part of a United Nations plan called “Agenda 21,” which they fear will force humans to live in designated areas and turn the rest of the planet into protected biosphere reserves.