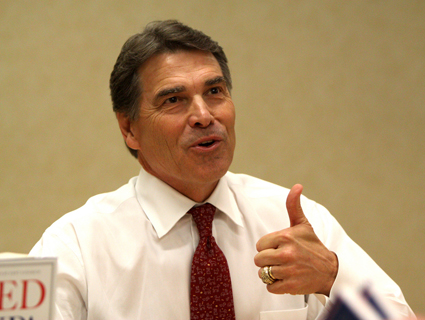 When Rick Perry arrived at the Electric Ballroom in Waterloo, Iowa, on Sunday night, he was greeted like a soon-to-be conquering hero. The Texas governor and newly minted Republican presidential candidate was immediately mobbed—first by the press, and then by a crowd of well-wishers, all eager to meet the GOP’s new savior, the man who can turn back the red tide of socialism next November and return the United States to its constitutional, Judeo-Christian roots. If nothing else, he’s got a firm handshake. A very, very firm handshake.

It was day two of the Perry campaign—he formally kicked things off with a speech in South Carolina on Saturday—but the Waterloo visit was his first stop in Iowa, and, more to the point, his first stop in the city Minnesota Rep. Michele Bachmann has made the centerpiece of her own presidential campaign. With Bachmann’s victory at the Ames Straw Poll still fresh, the two front-runners for Iowa’s first-in-the-nation 2012 primary shared the stage at a county GOP fundraising event and offered a glimpse of what the next four months (if not longer) might look like.

Perry’s pitch depends heavily on driving a cultural wedge between himself and the current president. In fairness, there’s a pretty wide gulf between the two. Perry talks up his hometown of Paint Creek, Texas, a pinprick of a town with “no zip code” where he met his wife at a piano recital when he was 8, earned a gold star in 4-H, and became an Eagle Scout. He segues from there to his career as an Air Force transport pilot, which, he says, taught him that America truly was God’s exceptional nation. “I realized not everyone values life the way we do,” he says.

Perry is from Paint Creek, and he is everything else he describes, too, but the larger point—the one Black Hawk County Republicans were supposed to hear—is that Perry has the kind of upbringing conservatives have never forgiven Barack Obama for not having. As Mike Huckabee put it, most Americans grew up with Boy Scouts and Rotary clubs, not madrasas (ignoring that Obama was, in fact, a Boy Scout). Perry went abroad to discover how much he loved America; Obama went abroad to discover his Mau Mau roots.

In his address in Waterloo, Perry identified the exact age—27—at which he fully understood the greatness of America, and then he brought things to the present day, jettisoning any pretenses of subtlety.

“One of your Iowans will be placed in God’s green earth this Friday—one of these young Navy SEALs who lost his life in Afghanistan,” he said. Then he put the loss in context: “One of the reasons—one of the powerful reasons I’m running for president is to ensure that every young man that puts on the uniform for this country respects entirely the president of the United States.” (Read my colleague Adam Weinstein on the full meaning of this quote.)

Throughout all of this, as Perry discussed the urgent need for deregulation and lawsuit reform, he mixed his Texas folksiness (a humble swagger, if there is such a thing) with the controlling style of an executive. At various points in his remarks, he directed his statements at “Senator”—as in Sen. Chuck Grassley (R-Iowa), the other high-profile dinner guest—as if he were already a part of the Washington discourse he says he disdains.

“The idea, and you tell me whether this true or not, but one of my fellas told me if you drive a tractor from one side of the road to another, you’re gonna have to have a commercial driver’s license—I mean get out of here!” he said. He checked with Grassley to hear if that was the case and was relieved to find out that it wasn’t. But the point stands.

When taken with his continued insistence that, for the last two years, he wasn’t interested in going to Washington, Perry is framing his entrance as that of a modern-day Cincinnatus, a reluctant old soldier who put down his Ruger .380 with laser sights and hollow-point bullets and left behind the parched scrubland of Paint Creek to make things right.

“I hope nobody took that as being angry, because I have heard people tell me, you know, you tea party folks are angry. We’re not angry; we’re indignant,” Perry said, to hollers from the audience. “We’re indignant at the arrogance and the audacity that this administration is showing about the values that are important to the people of America.” Perry’s line of attack is cutting, but it is not new. He’s simply adopting the tack that’s been used by some of Obama’s previous opponents—Perry, to use John McCain’s line, is “the American president Americans have been waiting for.”