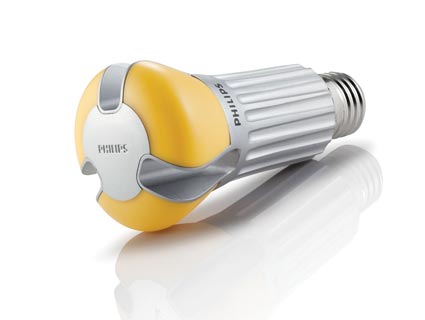 Last week there were lightbulbs in the air at Mother Jones. Reporter Tim Murphy had no sooner penned his piece on Rep. Michele Bachmann’s weird conspiracy theories about compact fluorescent legislation than a big package arrived on my desk. I opened it, and there, unfortunately nestled between two hunks of Styrofoam (have I mentioned how annoyed I get when companies send me “green” swag swaddled in unnecessary packaging?) was Philips’ brand new LED warm white bulb. According to its package, the 12.5-watt LED acts exactly like a 60-watt incandescent bulb—with the addition of a few cool tricks: It lasts 15 years and will save me $142.50 in electricity costs over its lifetime. On Slate, Farhad Manjoo recently raved about LED bulbs. I thought: Sign me up!

So I switched the new bulb into my desk lamp. For the past few days, it’s been casting a nice whitish glow over my desk. Still, I probably won’t be retrofitting my house with LEDs anytime soon, for one big reason: Models like the one Philips sent me retail for a prohibitive $45, compared to $1.50 for a CFL bulb. The price difference doesn’t quite correlate with lifespan: CFLs last about one-third as along as LEDs. And while we all know older CFL bulbs were flickering, headache-inducing disasters, most newer models are actually pretty comparable to incandescents in light quality. So is the LED really worth the hefty initial investment?

First off, it’s worth pointing out that both CFLs and LEDs are dramatically more energy efficient than old-fashioned incandescent bulbs, by about 75 percent and 90 percent, respectively. The main reason that LED bulbs cost so much more than CFLs is that they rely on more complicated (and therefore more expensive) technology. The light-emitting source in a CFL is a small amount of gas that, when stimulated with electricity, illuminates. LED bulbs, on the other hand, contain semiconductors, which give off light through movement of electrons when a current passes through. “Think of an LED like a small electrical appliance,” says Celia Lehrman, deputy home editor at Consumer Reports.

Aside from their long lifespan, LEDs have a few noteworthy advantages over CFLs. While CFLs can take as long as three minutes after being turned on to reach their full brightness, LEDs brighten immediately. LEDs work much better with dimmers than CFLs. Another big LED plus: Unlike CFL bulbs, they don’t contain mercury. Although few LED-bulb-specific recycling programs exist (Philips spokeswoman Sylvie Casanova says LED bulbs are “like small appliances” and therefore have to be recycled like any other e-waste) their long lifetime will give manufacturers a head start on creating recycling programs.

Lehrman expects Consumer Reports to release its report on CFL bulbs in September. Till then, if you’re in the market for an LED bulb, says Lehrman, make sure you know what you’re looking for. While incandescent and CFL bulbs’ brightness is generally measured in watts, LEDs are measured in lumens: An 800-lumen bulb is roughly equivalent to a 60-watt incandescent. Another important label to look for is color temperature or light color, measured in Kelvin. My freebie bulb has a color temperature of 2,700, which means it emits a warm white light. With higher temperatures come different colors: 3,000 would look more like the bright, white light emitted from a halogen bulb, and 4,000 and higher would look bluish.

If you’re not willing to shell out for an LED bulb yet, Lehrman says the price is likely drop down the line, and a few LED manufacturers are planning to offer rebates. Till that happens, I’ll probably stick to CFLs and continue to phase out my electricity gobbling old incandescents. Sorry Michele Bachmann!