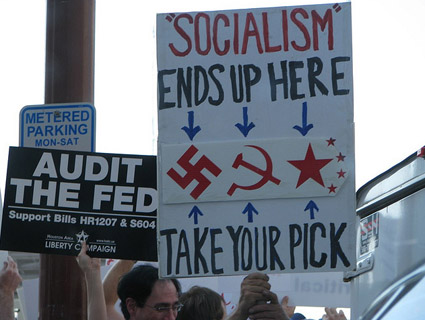 The Tea Party Nation is one of four right-wing groups touring Wisconsin this weekend in a last-ditch effort to bolster the six GOP state senators facing recall on August 9. It’s anyone’s guess if if the tour will make any difference—attendance at a Friday tour stop looked middling—but Tea Party Nation founder Judson Phillips won’t let that stop him from stirring controversy.

A few days ago, Governor Walker showed up to open the state fair. This was not a political event. It is one of those ceremonial events that a governor is obligated to do. His remarks were not political and in fact, consisted mostly of saying, “I declare the state fair to be open.”

The Wisconsin Red shirts, the left’s modern version of Brown shirts, were there to shout Walker down and generally ruin the fair for as many people as they could.

“Brownshirts” was the name given to the paramilitary wing of the German Nazi Party, known as the Sturmabteilung, or SA. The SA was founded by Hitler in the early 1920s. They earned their name because their uniforms were said to resemble those of Benito Mussolini’s “Black Shirts,” the armed squads who violently enforced Mussolini’s fascist agenda. The brownshirts attacked Jews and non-Nazi Germans in the streets and suppressed any hint of opposition; their violent intimidation tactics helped fuel Hitler’s ascent to power.

The liberals-as-Nazi-storm-troopers comparison wasn’t Phillips’ only attack in his Saturday missive, though it is his most incendiary. He also branded the people who protested the tea party tour as “not the brightest people,” “paid union protestors,” and as having “George Soros’ money in their pockets.” (Soros, of course, is conservatives’ biggest bugaboo.) On Friday, Phillips accused liberals of wanting to “break the back of conservatives here in Wisconsin” through the recall process while also pushing Wisconsin toward financial ruin.

Amazingly, Phillips isn’t the first to make this kind of comparison. In February, a posting on the site of Patriot Action Network, one of the four groups now touring Wisconsin, called the Service Employees International Union “Obama’s brown shirts.” And in March, Katherine Kersten, a fellow at a conservative Minnesota think tank called the Center of the American Experiment, asked in the pages of the Minneapolis Star-Tribune if the protesters at the Wisconsin state capitol in Madison were “Nazi brownshirts at work, busting up a meeting of political opponents in 1933 Germany?”