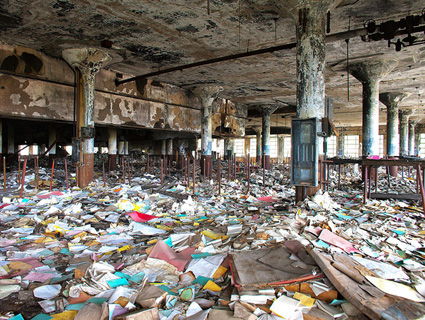 The debt ceiling deal hammered out by President Barack Obama and congressional leaders and passed in the House on Monday afternoon makes deep, painful, and lasting cuts throughout the federal government’s budget. What’s on the chopping block? The numbers tell the tale.

The Obama-GOP plan cuts $917 billion in government spending over the next decade. Nearly $570 billion of that would come from what’s called “nondefense discretionary spending.” That’s budget-speak for the pile of money the government invests in the nation’s safety and future—education and job training, air traffic control, health research, border security, physical infrastructure, environmental and consumer protection, child care, nutrition, law enforcement, and more.

Want to learn more about the debt ceiling fight? Read the editors on the real problem with John Boehner, review our detailed, updated explainer on how we got to this point, and learn why Kevin Drum thinks the deal sucks. Still hungry? David Corn has a great story on the Obama administration’s political strategy.

The White House’s plan would slash this type of spending nearly in half as a percentage of gross domestic product, from about 3.3 percent of America’s GDP to as low as 1.7 percent, the lowest in nearly half a century, says Ethan Pollack, a senior policy analyst at the left-leaning Economic Policy Institute. Pollack’s calculations suggest the cuts in Obama’s plan are almost as deep as those in Rep. Paul Ryan’s slash-and-burn budget, which shrunk non-defense discretionary spending down to just 1.5 percent of GDP. The president has claimed that the debt deal will allow America to continue making “job-creating investments in things like education and research.” But on crucial public investment, Obama’s and Ryan’s plans are next-door neighbors. “There’s no way to square this plan with the president’s ‘Winning the Future’ agenda,” Pollack says. “That agenda ends.”

Environmental protection offers one useful window onto the damage this deal might inflict. The president has boasted that his deal with the GOP will usher in an era featuring “the lowest level of annual domestic spending since Dwight Eisenhower was president.” But Melinda Pierce, a lobbyist with the Sierra Club, says the plan could choke off funding needed to enforce the bedrock environmental-protection laws on the books, including as the Clean Water and Clean Air Acts. “Remember, the Eisenhower era was before we passed the Clean Water Act and the Clean Air Act,” Pierce says. “There just won’t physically be the funds available to protect drinking water and to ensure there’s clean air to breathe.”

Ben Schreiber, a tax analyst with Friends of the Earth, a national environmental advocacy group, says the Obama-GOP debt ceiling deal could also drive a stake through the heart of investments in wind, solar, and other clean-energy technologies. “The clean-energy revolution becomes a casualty of these cuts,” Schreiber says. He adds that the Environmental Protection Agency also sends money to the states for their own environmental protection efforts, which could suffer after such a drastic cutback in domestic spending. At the same time, he says, corporate subsidies for oil and gas companies, worth an estimated $30 billion over ten years, are untouched in the latest debt ceiling proposal. “Polluters are getting off scot-free,” he says. “We’re basically turning the environment over to the industry.”

Jobs programs could also go under the knife. Rick McHugh, a staff attorney at the National Employment Law Project, points to two endangered programs: the Workforce Investment Act, which funds job training programs for young, adult, and dislocated workers, and the Trade Adjustment Assistance program, which provides benefits and training to workers whose jobs were lost due to outsourcing. McHugh says both programs are necessary at a time when 14 million Americans are out of work.

McHugh adds that the bill does not include an extension of federal funding for unemployment benefits, which is set to expire at the end of the year. All told, he fears that already weak job market could be dealt a massive body blow by the Obama-GOP debt deal. “To have this big of an austerity proposal in Washington is disconcerting and misguided,” he says.

When it comes to public funding for education, the picture is more mixed. The White House’s proposal protects Pell grants for low-income college students, a big victory for education advocates. But protecting Pell funding meant eliminating an interest-rate subsidy for graduate students and a perk that lowered interest rates for graduates who made their loan payments on time. Amy Wilkins, the vice president for government affairs and communications at the Education Trust, says funding for K-12 public schools, Head Start, special education, and more are vulnerable too.

Nor is this the final round of cuts. The Obama-GOP deal also sets up a bipartisan deficit reduction committee that must identify, by the end of 2011, an additional $1.5 trillion in cuts to be spread over 10 years. If the committee fails to reach an agreement or Congress fails to enact its recommendations, across-the-board cuts totaling as much as $1.2 trillion will occur anyway. In the end, nondefense discretionary spending could see billions more in cuts on top of the initial $570 billion. Social Security and Medicaid would be protected from deep cuts, but Medicare could be cut by hundreds of billions of dollars if, for instance, the committee decides to raise the eligibility age for the program.

What’s not in the deal could hurt too. In particular, EPI’s analysis estimates that not extending federal unemployment benefits and the payroll tax cut, combined with the deal’s array of cuts, will result in 1.8 million fewer jobs and a loss of $241 billion in economic output in 2012. “It’s going to suck a good deal of demand out of the economy,” EPI’s Pollack says. “It’s going to be devastating.”