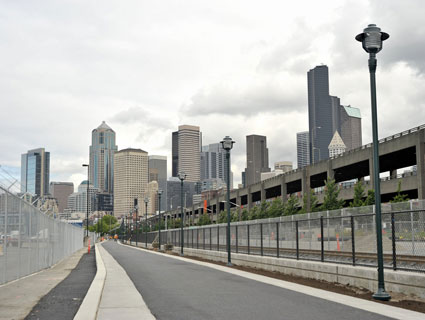 Just over a year after Seattle announced plans to go carbon neutral, a government-commissioned study outlines just how the city might reach its goal. The report, penned primarily by the international research group Stockholm Environment Institute and introduced to the City Council in May, lays out a detailed scenario in which Seattle cuts back its greenhouse gas emissions by 90 percent in 2050 (compared to the amount it emitted in 2008).

The plan is likely the most ambitious any US city has seen thus far. While carbon neutrality in its strictest form means emitting net zero carbon emissions, the term has also been used describe city efforts to offset greenhouse gas emissions from specific industries (like utilities or construction), as Phoenix, Austin, and Vancouver are doing. Seattle’s goal stands out because it would be first in the US and third in the world (after Copenhagen and Melbourne) to consider nearly zeroing out emissions across the board.

Seattle is particularly well-positioned to meet its goal, the study’s authors say, because much of its electricity is already sourced from renewable hydropower rather than fossil fuels. The city could further cut back on emissions by making its buildings (old and new) more energy efficient, public transportation more efficient and widespread, charging higher tolls, reducing landfill, and establishing an alternative fuel-based auto fleet. The city could completely offset its emissions by the same year, the study adds, if it sequestered greenhouse gases through urban forests or invested in emissions reductions projects elsewhere. But even for a city with a relatively small carbon footprint like Seattle, there are many steps to take before achieving carbon neutrality. Here are some highlighted in the report:

The study’s authors concede that they do not include an analysis of the economic impact such strategies would have, nor do they account for the funding or political challenges that could slow down the city’s adoption and implementation of the plan. They also notes that some strategies could lead to a rebound in emissions. If more efficient home energy systems lowered bills, for example, consumers would have more money to spend on businesses, which in turn could elevate commercial energy use.

Still, with broader climate legislation out of reach in Washington and a global climate agreement locked in a political stalemate, efforts like Seattle’s set an important example of how cities can significantly reduce their emissions without further ado.