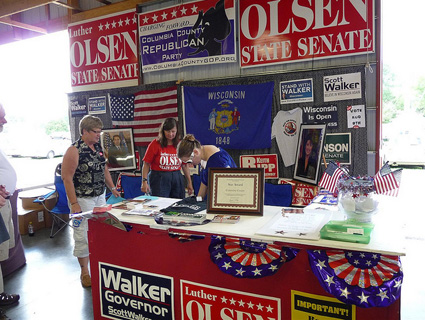 He runs the Wisconsin Democracy Campaign, a nonpartisan group tracking the flow of money in Badger State politics—though, presently, “torrent” may be the best way to describe the state’s campaign finance environment. In the run-up to next week’s recall elections targeting six Republican state senators, outside advocacy groups have flooded Wisconsin with millions in campaign spending. McCabe estimates that nearly $31 million has been spent on the recalls in about four months’ time. It’s a staggering sum considering $3.75 million was spent on the entire slate of state legislative races in 2010. Recall spending “is totally off the charts,” he says. “This is so out of whack from everything we’ve ever seen.”

Ordinarily, such parochial races would not attract this kind of big money, but they have taken on national implications. Notwithstanding an effort to oust Republican Gov. Scott Walker, they’re viewed as the last of the big battles that began when Walker went to war with the state’s unions, sparking weeks of protest in the state capital. If Democrats net three or more seats in the recalls and wrest control of the state Senate away from the GOP, the elections could offer a model for angry Dems and unions in other states that have cracked down on organized labor. “You don’t have to stretch to see the connection with labor issues in Ohio, with an upcoming referendum there for public employees, and the other states doing things with labor,” says Charles Franklin, a University of Wisconsin-Madison political science professor.

The $31 million spent on the recalls—the six August 9 elections and two more targeting Democratic state senators on August 16—splits evenly between left- and right-leaning groups. Where the spending is lopsided, McCabe says, is between the candidates and outside spending groups. In-state and out-of-state independent advocacy groups have dropped five times more than the candidates. Not that the candidates are struggling: GOP state Sens. Alberta Darling and Dan Kapanke have both smashed the state senate spending record of $722,000 in their recall races; so far, Darling has spent more than $1 million and Kapanke more than $800,000. (For comparison, the average winning congressional campaign in 2010 cost $1.4 million, a figure Darling could exceed.)

The biggest spender on the Democratic side is We Are Wisconsin, a coalition of labor unions. Campaign finance filings show about $8.8 million in spending by the group so far. Other Democratic groups include the Greater Wisconsin Committee, a liberal advocacy organization that has pumped roughly $1.5 million into the recalls to date, and the state’s main teachers’ union, the Wisconsin Education Association Council, whose spending McCabe puts at about $500,000. Obama for America, the president’s reelection committee, is also involved in the recalls, organizing volunteers for get-out-the-vote drives.

The conservative playing field is more scattered. Instead of one powerhouse coalition, numerous conservative outfits have trained their sights on a few individual recall races, rather than blanketing the state. The Republican State Leadership Committee, a group devoted to electing GOPers at the state level, has zeroed in on the Green Bay TV market, McCabe says, hoping to boost GOP Sen. Rob Cowles’ chances against former Brown County Executive Nancy Nusbaum. Two groups with ties to the Koch brothers, Americans for Prosperity and Citizens for a Stronger America, have poured hundreds of thousands of dollars into TV ads, direct mail, and more. The Club for Growth, a fiscally conservative advocacy group, has also been active in Wisconsin’s TV markets, McCabe says.

While the spending is more or less even, here’s the big difference between the two sides: The left-leaning groups usually disclose their donors, while the right-leaning groups mostly don’t. For McCabe, the geyser of dark money is the big story of the recalls. He says two-thirds of the recall spending derives from undisclosed sources, and he blames the Supreme Court’s Citizens United decision for allowing so much anonymous spending.

The influx of campaign spending has fueled a fight on the airwaves that has skewed the truth and bordered on malicious. The site PolitiFact has debunked a slew of radio and TV ads, which depict Democrats as greedy, pro-tax zealots and Republicans as tax dodgers and education-slashing conservatives. Even the ads that are true have hit below the belt—a short TV spot by Wisconsin Family Action highlighted Democratic Rep. Fred Clark’s spotty driving record and included video of Clark hitting and seriously injuring a bicyclist in a Madison intersection.

So vicious are the campaign ads that Clark, who’s challenging GOP Sen. Luther Olsen for the Senate’s 14th District seat, asked Olsen to sign a pact requiring truth in political ads and disclosure of outside dark money. Olsen himself was the target of a false ad saying he wanted to cut Medicare. “Those third-party groups are trying to scare the bejeebers out of old folks,” Olsen said.

Franklin, the University of Wisconsin political science professor, says the sheer amount of spending and its impact on the races could well determine the course of the remaining three-plus years of Scott Walker’s tenure as governor. “If Republicans retain the Senate, and then in 2012 hold on or expand their current majority, then that’ll be a real ratification of what he’s done,” Franklin says. But if Democrats win the majority, “it will give them the veto and really change political power.”