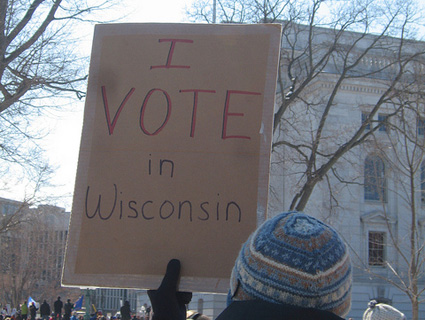 Crumpled campaign flyers and potato chip bags litter the lawns on West Glenbrook Road, a quiet street in what locals call Milwaukee’s “Far North Side.” Austin Thompson, a lanky 24-year-old with a scruffy beard and hip eyeglasses, knows the area well. An organizer for Wisconsin Jobs Now, a nonpartisan coalition of unions and faith and community groups, Thompson has spent months here knocking on doors—talking jobs, health care, and the impact of Gov. Scott Walker’s policies while urging the residents of this overwhelmingly black neighborhood to vote in Tuesday’s recall election.

On a cool Sunday afternoon, Thompson sits in the living room of a woman on his contact list named Macy. Except Macy’s not dressed, she yells from the kitchen, and so Thompson strikes up a conversation with Macy’s daughter Dana, who admits she hasn’t followed the recall elections. Thompson’s pitch takes a local flavor, mentioning cuts to the city’s bus service and the $800 million Walker slashed in school funding. “What do you think about that?” he asks.

“It’s horrible. But what am I supposed to do about it?”

“What are you willing to do about it?”

Dana thinks about it, then says she’s not registered to vote. Thompson grabs a form from the stack he carries and explains the ins and outs of registering on election day—what to bring, where to go. He never mentions either of the recall candidates in Dana’s district, GOP Sen. Alberta Darling and Democratic Rep. Sandy Pasch, stressing only the importance of voting and urging friends to do the same. “This election could come down to five votes,” he tells her. “That could be you.”

Thompson is just one man in an army of volunteers and organizers here in Wisconsin banging on doors, handing out campaign flyers, calling potential voters, and drumming up support in one of the biggest get-out-the-vote drives in recent memory. Officials with the Democratic Party of Wisconsin (DPW), labor unions, and other left-leaning groups say they never anticipated such an outpouring of energy in an off-year election, in the dead of summer, and in mostly Republican-leaning districts. “We haven’t hit our volunteer numbers like this since the Obama campaign in 2008,” says Graeme Zielinski, a spokesman for the state Democratic Party.

The numbers tell the story. This past weekend, 8,234 people volunteered for the state Democratic Party to support the Democratic challengers in Tuesday’s recalls. Volunteers made contact with nearly 785,000 voters last weekend alone, according to the Dems’ estimates. All told, the party says total voter contacts have surpassed 2 million. We Are Wisconsin, the coalition of labor unions that’s been a powerful force in the recalls, said it knocked on nearly 200,000 doors over the weekend—40 doors a minute statewide—and deployed hundreds of volunteers. “To have mobilized so many ordinary citizens, many of whom have never been involved in politics, to stand up and take their government back from Scott Walker and his enablers in attacking Wisconsin’s working families is nothing short of astounding,” says Kelly Steele, a We Are Wisconsin spokesman.

“Scott Walker Doesn’t Want You to Be Doing This”

On Monday evening, the Laborers’ 464 union hall, tucked behind a Chinese buffet on the outskirts of Madison, buzzes with the sound of two-dozen volunteers calling prospective voters, a din punctuated by the ding of a bell announcing another vote for a Democratic candidate.

The state Democratic Party moved its phone bank operation to the union hall over the weekend after outgrowing the party’s downtown offices. But even the hall proved not quite big enough: Over the weekend, volunteer training was moved to the parking lot, Dem officials say, after indoor space ran out. The hall is awash in color, with phone bank volunteers huddling behind bright pink slices of foam board that have been folded into personal dividers to dampen the noise. “We Are Wisconsin” and anti-Walker signs are taped inside the dividers like stickers on a school locker, and a handwritten message scrawled inside one foam board reads, “Scott Walker Doesn’t Want You to Be Doing This.”

From here, volunteers call voters in most districts at stake in Tuesday’s election. They man the phones in three-hour shifts, though some opt to stay for six hours or more, says John Magnino, a DPW volunteer who was training newcomers. “Some people just want to be here for as long as they can,” he says.

Volunteer Kathy Fullin, 62, is making calls on behalf of Democrat Nancy Nusbaum, who is challenging GOP Sen. Robert Cowles in the Green Bay area. Fullin says she was surprised to hear pundits predict an easy win for Cowles given the positive feedback she’d gotten from potential voters in Cowles’ district.

Looking around the room, Fullin says her reason for volunteering three hours on a rainy weekday night isn’t all that different from the other volunteers’. It grew, she insists, out of concern that the state that pioneered unemployment insurance, public-sector unions, and workers’ compensation was veering in the wrong direction. “We were always a state with a strong tradition of trying to help everyday workers, and of good government that’s open to the people,” she says. “And now the people are coming here to do this because of this attack on middle-class workers and, really, on the middle class in Wisconsin.”

At a strip mall in north Milwaukee, people spill out of the three storefronts that serve as the campaign headquarters for Sandy Pasch, the Democratic assemblywoman challenging Sen. Alberta Darling. The Darling-Pasch showdown is considered the most high profile of Tuesday’s six recalls given Darling’s clout in the state Senate, where she’s the co-chair of the Joint Finance Committee. Darling helped craft Walker’s anti-union budget “repair” bill and is one of the governor’s top allies in the legislature. With outside money pouring in and polls showing a dead heat in the race, no one can say for certain who will win. But after an hour at Pasch’s HQ, one thing’s clear: If she falls short, it won’t be for lack of mobilized voters.

So many people have jammed into Pasch’s storefront space that the line to sign up to work often stretches out the door. Inside the hot and sticky storefront, tables pile high with clipboards for canvassing volunteers, campaign fliers, as well as bottled water, snacks, pizza, and a plastic tub filled with bags of Wonder bread for sandwiches. Two doors away, Pasch’s operation has transformed a former tanning salon with palm-tree printing carpet into a phone bank. The tanning rooms give volunteers a quiet place to call potential voters. Even Pasch herself is working the phones from the front seat of her SUV parked out back. (Her cell phone doesn’t work inside campaign HQ, she says.)

On Saturday and Sunday, a Pasch staffer says, more than 800 canvassers signed up at either Pasch HQ or the campaign’s three satellite offices. Volunteers knocked on 25,000 doors and made 25,000 phone calls in a district of roughly 120,000 eligible voters, the staffer says. Volunteers working for Pasch were young and old, true-blue Democrats and moderate Republicans and independents. Some had worked in local politics before; many had not. Tracey Corder, a Pasch volunteer, says she didn’t even know Darling was her state senator until the cries for her recall erupted in March after the passage of Walker’s controversial anti-union bill. Now Corder is so enmeshed in the campaign that she helps train the new volunteers streaming through the campaign’s doors.

Sandy Pasch says that she’s never seen such a Herculean mobilization effort. When she herself went door to door in recent weeks, she says, the overarching message she heard was one of disgust and anger with Darling, Walker, and the GOP rank-and-file. “A lot of people say, ‘I’ve voted Republican my entire life, but I’m voting for you because my daughter is a teacher,'” Pasch says.

It’s no surprise that, after months of canvassing and GOTV, a sense of weariness at Wisconsin’s recall summer has taken hold, in north Milwaukee and elsewhere. “I think everyone’s looking forward to this election, getting it done, then moving on with the summer,” Pasch says. Up in the Far North Side, some residents dash back into their houses when they see Austin Thompson turn up their driveway, sneaking glances between the window blinds while Thompson knocks again and again. At one house, the residents, sitting on the front stoop, are sick of being canvassed and want nothing to do with Thompson, scowling at him as he approaches.

He starts his spiel but immediately gets cut off. “Why y’all keep fucking coming around here?” a tired-looking woman inked with arm and chest tattoos asks him. “You people have come by here 10 times today. People gettin’ sick of y’all.”

“I hear ya. We’re just makin’ sure everyone in this house is voting,” Thompson says. “This is really important. Every vote matters.”

“Yeah, well some people maybe gettin’ so annoyed they ain’t even gonna vote no more.”

But for the most part, the residents of West Glenbrook that Thompson visits are willing to hear him out and take one of his bright orange anti-Scott Walker fliers. The work isn’t easy: Sometimes Thompson spends a half hour giving what feels like a complete civics lesson; in more solidly middle-income households, though, the residents know what he’s going to say before he says it. “These people understand what the fight is about,” Thompson says between houses.

A few hours into the afternoon shift, Thompson spots a familiar face getting out of her car in the driveway of a duplex. Thompson makes small talk, asking after the woman’s mother, talking about the recent attacks at the Wisconsin State Fair. Then, for what must be the 20th time, he makes his pitch.

“What? That’s why we voting in this recall, right?”

“So you’re gonna be there?”

“Then after that, you know we’re recalling Scott Walker.”

“And you know I’ll be voting then too.”