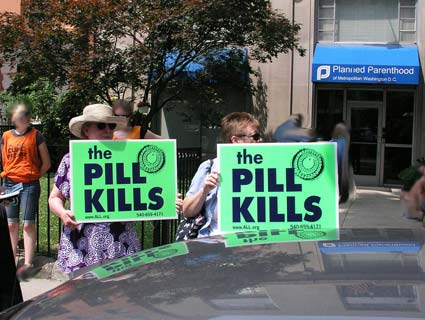 The most controversial item on the Mississippi ballot this fall is not a politician but rather an idea. In November, Mississippians will vote on an amendment to change the meaning of the word “person” in the state constitution. Under the new language, human life would begin not at birth but at the moment of fertilization. If the amendment passes, it will outlaw abortion in the state entirely, even in cases of rape or incest. It might even leave some forms of contraception, and procedures such as in vitro fertilization, on life support.

Ballot Measure 26, the “Personhood Amendment,” has drawn the endorsement of celebrities including Mike Huckabee and Brett Favre’s wife, Deanna. The Tupelo-based American Family Association (AFA), one of the nation’s leading social-conservative organizations, is teaming up with the Republican gubernatorial nominee, Lt. Gov. Phil Bryant, to secure its passage. In mid-September, Mississippi’s attorney general, Jim Hood, announced his support for the measure.

But for all the momentum it has gained, the amendment is in large part the handiwork of one lesser known figure, an activist named Les Riley. A tractor salesman, former candidate for agriculture commissioner, and chair of the state Constitution Party, Riley is steeped in fringe politics. He founded the group Personhood Mississippi, drafted the amendment’s language, started the signature drive that got it on the ballot, and promoted it statewide starting on June 2 with an inflammatory campaign called the “Conceived in Rape Tour.”

The idea behind the amendment is simple: If by law life begins at fertilization, then abortion (and human cloning) would become legally impossible. In an interview with the AFA this summer, Riley asserted that his amendment would have “international implications” and could become “the biggest news in the pro-life movement in 20 years.” If all goes as planned, it will launch a court challenge that will end with Roe v. Wade itself being overturned.

As radical and grandiose as that may sound, it fits with fringe views from Riley’s past. A neo-secessionist, Riley once supported an effort to form an independent theocratic republic in South Carolina, and he belonged to an organization—the League of the South—dedicated to forming a “free Southern Republic” built on biblical law.

Prior to forming Personhood Mississippi in 2009, Riley was, for a brief period, a blogger for a fledgling secession movement in South Carolina called Christian Exodus. The movement was founded with the goal of “forming an independent Christian nation that will survive after the decline and fall of the financially and morally bankrupt American empire.” It was spurred into being after the 2003 Supreme Court decision Lawrence v. Texas, which struck down anti-sodomy laws as unconstitutional.

Riley refers to Washington, DC, as “Sodom on the Potomac.”

As the group explained in its mission statement, “The chains of our slavery and dependence upon godless government have more of a hold on us than can be broken by simply moving to another State.” It planned to move 12,000 fundamentalist Christians to the Palmetto State by 2006, where they would then work to nudge the state toward secession shortly after that.

Exodus drew its inspiration from the Free State Project, a plot hatched by activists in 2002 to turn New Hampshire into a libertarian paradise through a mass migration of “liberty-loving people.” But while the Free Staters have carved out a political toehold in the Granite State, the South Carolina project never got traction. “Christian Exodus was a huge joke,” says Mark Potok, president of the Southern Poverty Law Center, a liberal watchdog group. Even Bob Jones University, the fundamentalist Christian school that serves as the spiritual anchor of the region, came out against it. “As Christians,” a spokesman told Fox News in 2004, “it’s not our job to start a new country.”

For years, Riley also served as a leader of the Mississippi chapter of the League of the South, a neo-confederate organization that subscribes to the theory that the nation can only be saved by breaking it apart. The League, which calls for a new nation rooted on European principles and a culture reflecting of its “European population,” is based on Christian reconstructionism, which posits that the United States was founded on and should return to biblical law. (Riley refers to Washington, DC, as “Sodom on the Potomac” and quotes reconstructionist godfather R.J. Rushdoony, who said “all ideas are inherently religious.”)

Mississippi only has one facility that provides abortion, the product of years of restrictive legislation. But more than abortion is at stake with Ballot Measure  26, says Bear Atwood, legal director for the Mississippi ACLU. If it passes, it would have a “chilling effect” on women’s health care access—including seemingly unrelated procedures such as in vitro fertilization. “When you have in vitro fertilization, multiple eggs will get fertilized, but not all of them can be implanted,” she explains. “And now you have that problem of eggs which can’t be implanted, or of implanting too many or all of them, which would put the woman’s health at risk. So really, the only choice the woman would have would be to not to go forward.”

Riley declined to be interviewed or respond to written questions about his past or present work. Instead he asked Brad Prewitt, executive director of Yes on 26, a new group that is now leading the effort to pass the amendment, to answer questions on his behalf. (Yes on 26 features representatives from Riley’s Personhood Mississippi, as well as a number of conservative Christian politicians and organizations.) Prewitt called Atwood’s concerns about fertility procedures “poppycock.” “All I would say is you can’t destroy the embryos if people want to adopt embryos just like they want to adopt children,” he says. Instead of being thrown out, he says, they would simply be frozen—although, as a recent Jackson Clarion-Ledger op-ed pointed out, without clarifying language for the amendment, that might be classified as child abuse. The Yes on 26 website has referred to the use of embryonic stem cells for research purposes as “human cannibalism.”

For the amendment’s supporters, the fact that the new law would not allow exceptions for rape or incest is something to be highlighted. Riley’s Conceived in Rape Tour was an attempt to counter the notion, held even by many pro-lifers, that abortion is acceptable in cases of rape or incest. Those are “a tragic occurrence,” Prewitt says, “but you don’t execute the product of the crime, and that’s what abortion does.”

Although Prewitt argues that contraception would not be affected by the measure since it precedes fertilization, he also touts the morning-after-pill as one of its targets, calling it a “human pesticide.” (An FAQ aimed at debunking misconceptions on the Yes on 26 website claims “most forms of ‘the pill'” will not be banned.)

One prominent conservative warned against “a gimmick that wastes money and harms pro-life candidates.”

Moreover, because the language of the amendment is so broad, it could force state agencies to revisit and revise any regulation that includes the word “person,” according to Jordan Goldberg, an attorney at the Center for Reproductive Rights. It would impact regulations on “the number of people who could ride a bus and the number of people who would be permitted to ride in a car,” she says, or any statute that involves the collection of census data, such as redistricting. “It sounds absurd, but frankly so is this proposal,” she says.

Prewitt, meanwhile, took pains to distance his organization’s work from that of Riley. “I would describe it probably as ‘fringe’ for sure,” Prewitt said of Riley’s secessionist background. “We’re not associated with ‘fringe,’ and we’re not fringe. But we’re not in control of what everyone does.” He added: “We like the United States, and we like living where we’re living, and we like inclusion, not exclusion.”

The movement Riley created in Mississippi is the latest in a parade of efforts over the last year to curtail reproductive rights through radical legislation. In February, South Dakota and Nebraska both considered bills that would have made it a “justifiable homicide” to kill an abortion doctor. In March, a Louisiana state legislator introduced a bill that would have classified abortion as “feticide.” Ohio is considering a measure known as the “Heartbeat Bill,” which would ban abortions once a heartbeat is detected. At Sen. Jim DeMint’s presidential forum in South Carolina in September, candidates were grilled on whether they supported applying 14th Amendment protections to fetuses. Riley’s effort takes it to the level of granting not just fetuses but also zygotes the same rights as people.

The ACLU of Mississippi, Planned Parenthood, and the Center for Reproductive Rights filed a joint lawsuit to block the measure from appearing on the ballot, but earlier this month, the Mississippi Supreme Court ruled that the referendum could proceed as scheduled. Writing for the 7-2 majority, justice Randy “Bubba” Pierce explained that the body didn’t have the authority to evaluate the merits of a provision before it went into effect: “Pre-election challenges of voter initiative proposals are subject only to the review of the sufficiency of the petition itself (i.e., its form) and not its constitutionality,” he wrote.

But abortion rights supporters may get some tacit help from an unlikely source: the pro-life movement itself. The only other state to hold a referendum on personhood is Colorado, which voted down constitutional amendments by a 3-1 margin in both 2008 and 2010. As those numbers suggest, the more radical approach has caused a schism among anti-abortion activists, with some high-profile leaders arguing that the proposals could be counterproductive.

Phyllis Schlafly, founder of the far-right Eagle Forum, warned in a 2010 newsletter that Colorado’s personhood drive was “a gimmick that wastes money and harms pro-life candidates.” James Bopp, the conservative lawyer behind the Citizens United ruling and counsel to National Right to Life, has argued that “significant damage would be done” if a personhood amendment were to be challenged in federal court—which it almost certainly would.

But Prewitt, and apparently Riley, see only a worthwhile gamble in pursuing their dream of overturning Roe v. Wade. “You don’t even know who’s gonna be on the Court, who’s gonna be in good health and living, who’s gonna get confirmed,” he says. “You can’t predict those things; it’s like wagering in Vegas.”