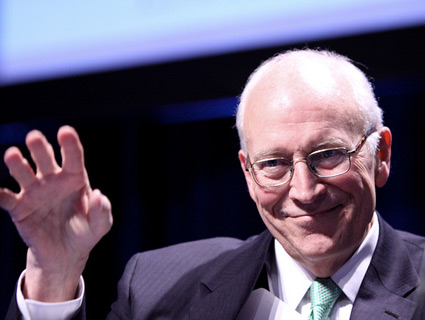 Party like it’s 2009: Dick Cheney is making the rounds to promote his new memoir, In My Time, and rehashing the same arguments about torture and national security he was making in the early months of Obama’s presidency. Based on an appearance at the American Enterprise Institute last week, Cheney hasn’t come up with much new material. Josh Rogin reports that ex-VP is still insisting that waterboarding was both effective and not torture:

“The notion that somehow the United States was torturing anybody is not true,” Cheney told an audience at the American Enterprise Institute at an event to promote his new book. “Three people were waterboarded and the one who was subjected most often to that was Khalid Sheikh Mohammed and it produced phenomenal results for us.” “Another key point that needs to be made was that the techniques that we used were all previously used on Americans,” Cheney went on. “All of them were used in training for a lot of our own specialists in the military. So there wasn’t any technique that we used on any al Qaeda individual that hadn’t been used on our own troops first, just to give you some idea whether or not we were ‘torturing’ the people we captured.”

As usual torture defenders want it both ways: They want to insist that torturing detainees was necessary to effectively interrogate them but that waterboarding isn’t torture. American servicemembers are waterboarded to prepare them to resist…torture. It might seem obvious that the non-simulated application of torture is torture, but I also exchanged emails with former Navy Intelligence Officer and SERE instructor Malcolm Nance, who explained the distinction:

At SERE we are in fact applying a real torture technique in a demonstration environment, but the intent is completely different. That’s the difference between torture and training. The training intent is equal experience to that of cops who get tasered or pilots who get dunked underwater or an ejection seat simulator. It is done so that they are aware of the effects and methodologies of an enemy’s worst methods but in a safe environment.

This is professionally known as “Stress inoculation.” A SERE student will be aware of his environment is a simulation, in the United States under the hands of professionals and that they will be in Taco Bell within hours. They also know that the technique is real but the intent is for him or her to be exposed to real enemy techniques in order to be prepared to endure far worse levels. They also get to practice their own methods to foil the interrogator. Stress inoculation is the entire being of SERE, it takes an unprepared trainee and gives them a small glimpse into what a real torturer will do.

The Bush administration decision to turn Stress Inoculation into a real torture regime is a beacon to the fact that they wanted to punish these guys. There was no scientific or experiential data to support its choice. It means that either the decision-makers were not fully briefed on the history of its ineffectiveness or they deliberately ignoring its ineffectiveness. The military had dozens of studies and hundreds of case studies of torture’s ineffectiveness on captive American service members over the centuries. Until 91/11 It was official DoD policy that torture does not work. Every SERE student is taught that.

As for getting “phenomenal results” from waterboarding alleged 9/11 mastermind Khalid Sheik Mohammed, the CIA Inspector General’s report on the subject was inconclusive—with the author noting that “you could not in good conscience reach a definitive conclusion about whether any specific technique was especially effective, or [whether] the enhanced techniques in the aggregate really worked.” Of course, what we know now is that when it came to tracking down Osama bin Laden’s whereabouts, KSM lied despite being subjected to waterboarding, as did other detainees who were tortured. Cheney seems to think those are “phenomenal results.”

Bush apologists have been trying for months to credit brutal interrogation techniques for the discovery Osama bin Laden’s hideout, all evidence to the contrary. Torture in fact, harmed the America’s intelligence collection efforts post-9/11, at least according to former FBI interrogator Ali Soufan. In his new memoir, he writes that the Bush administration’s fixation on torture, FBI agents ceased participating in interrogations, “meaning that some of the government’s most knowledgeable experts were unable to speak with the most important terrorists.” That claim is difficult to evaluate, but Cheney’s claims about waterboarding are false on their face.