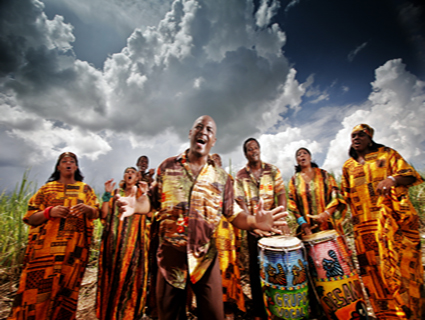 The Creole Choir of Cuba is indeed Cuban, but its 10 singers are all descendants of the Haitian diaspora who have set out to rediscover their musical heritage from a new cultural home base in Camagüey, Cuba’s third-largest city. While many artists and musicians struggled with censorship during Cuba’s so-called Special Period (earlier this year, Tiempo Libre told me how they scrapped together a makeshift radio with a coat-hangar antenna in order to hear American music), CCC director Emilia Díaz Chávez says his group never ran into any such trouble.

Maybe that’s because CCC’s singers gravitated toward the island’s Creole culture, as opposed to US pop music. They also pepper their songs with traditional Cuban congas. “As Cubans, we’ve made an effort to bring in elements of son and salsa,” Díaz Chávez says. “Marcelo and Teresita, our composers, have written new songs using the paradigms of Haitian music, using modern subject matter with older concepts.”

Pop in their brand new album, Tande-La, from Peter Gabriel’s Real World label, and you’ll hear the opening choral chant of “Edem Chante” (“Listen to Us”), written “during the dark days of the Duvalier regime.” A powerful solo cadence punctures the group’s breathy, harmonious chanting, ending in a guttural chuckle. That’s the format of many of the choir’s compositions, yet they employ diverse styles and voices that make each song distinct.

The singers perform with their hands and hips as much as they do with their voices. Brows tied and eyes crinkled shut, they pull from somewhere deep—as if channeling the ancestors that inspire them. The songs are as colorful as their lineages: Spanish, French, and Creole lyrics are folded into a Cuban and Haitian repertoire.

“Maroule,” a song about a lonely night cattle driver who gets mistaken for a bad spirit, evokes the immigrant’s plight: “Moving on, moving on. I will get there.” Indeed, the immigrant experience runs deep in their songs. Since the 17th century, Haitians have fled to Cuba—slave rebellions, natural disasters, and the need for work brought them to sugar plantations on the neighboring isle. Songs of resistance like “La Mal de Travay” and “Neg Anwo” display a keen awareness of Haiti’s modern-day woes but resonate with struggles deeply embedded in the singers’ cultural history.

Haiti “is by all counts an impoverished and afflicted country, and we see these songs as a call of unity and strength.”

“We are very aware of the state of Haiti today,” Díaz Chávez says. “It is by all counts an impoverished and afflicted country, and we see these songs as a call of unity and strength.” The biggest challenges in Haiti are quite basic, she adds. “It is sometimes too easy to forget that. Clean water and regular food is actually an incredible struggle.” (Must read: Mac McClellend’s on-the-ground account of Haiti’s trials one year post-quake.)

The singers have brought a bit of their light directly to their quake-stricken ancestral homeland. While many countries and organizations were stumbling to deliver on aid, the choir spent two months amid the rubble, contributing their hands and their songs. “In the Caribbean, we learn to process information, history, and feelings through music,” Díaz Chávez explains. The choir held music workshops in the refugee camps, entertained orphans, and performed in public. After a month, they noticed that “the music had really given them a place to feel secure amidst the ruins.”

While all Haiti has suffered, says Díaz Chávez, Haitians “need to feel like they have the power to be a nation that is equal to all other nations. In poverty, it is easy to feel disempowered, and that is what we’re trying to get across in our music: We are all capable of overcoming disaster.”

This week, the Creole Choir of Cuba kicks off a US tour, starting with festivals in Chicago and Bloomington, Indiana—and then on to the East Coast, California, and Oregon. For a taste of the group’s fiery refrains, check out “Tande” below. And read our interview with one of America’s top rock bands: “Arcade Fire’s Band Aid for Haiti.”