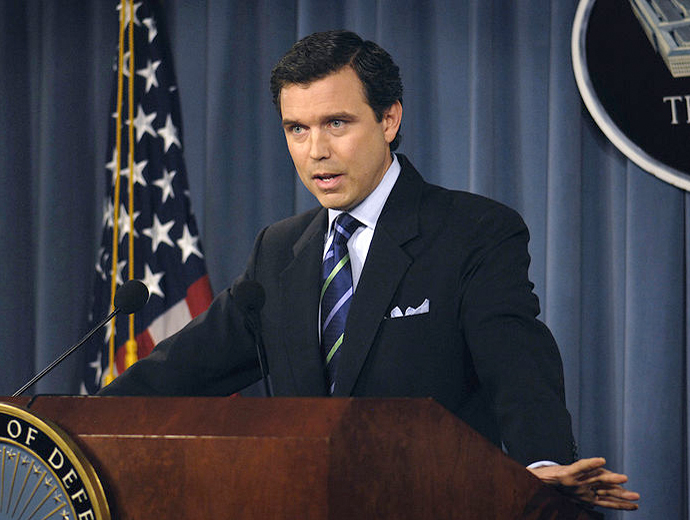 Geoff Morrell, in his previous life as the Pentagon spokesman.<a href="http://commons.wikimedia.org/wiki/File:US_Navy_070829-D-7203T-001_Pentagon_Press_Secretary_Geoff_Morrell_speaks_with_reporters_during_a_Pentagon_press_briefing.jpg">DOD</a>/Wikimedia

Back in April 2010, when BP’s Deepwater Horizon well was gushing crude oil all over the Gulf of Mexico, Pentagon spokesman Geoff Morrell was coy about a possible military response. “You want to work, I believe, hand in glove with industry here because in some cases they’re going to have…better assets than we would,” he told reporters.

A year and a half later, Morrell is enjoying those better assets firsthand: He has joined BP America as its new spokesman. Morrell “will oversee external and internal communications for BP in the United States,” according to an internal memo from company honchos quoted in The Hill. The memo added: “He will be responsible for leading our communications efforts in the US, as well as playing a critical role with our broader global communications and reputational activities.”

Morrell knows from “reputational activities”; as the deputy assistant secretary of defense for public affairs from June 2007 to June 2011, he had the unenviable task of defending military actions in Afghanistan and Iraq, articulating US policy on Korea (not always successfully), and putting a happy face on the Pentagon’s reaction to WikiLeaks and its harsh treatment of suspected leaker Bradley Manning.

But flacking for BP may be a tougher (if more lucrative) gig. Company shares just hit a one-year low on the heels of Tropical Storm Lee; it is being sued by everyone from the families of rig-explosion victims to onetime corporate partners such as Halliburton; its Moscow offices have been raided by Russian authorities; questions have been raised about its possible involvement in Libyan terrorist affairs; and there’s still that whole Gulf cleanup thing going on.

On the other hand, Morrell’s Pentagon experience may give him an inside track on BP operations: After all, the DOD has been a major source of government welfare for the Britain-based oil corporation. Military payments to BP for much-needed oil between 2007 and 2010 totaled $5.7 billion. In 2009, Pentagon cash—$2.2 billion of it—accounted for 16 percent of the corporation’s total profits.

Morrell also has expertise in an area of great interest to BP: Libya. The corporation had just secured rights from Muammar Qaddafi’s regime to begin exploratory drilling in the western part of the country when the rebellion started last spring. “Once we are committed to a military mission, it is not wise to pull the rug out from under our forces by defunding that operation,” Morrell said of US involvement in Libya in his final DOD presser. “That’s not helpful; that’s counterproductive.” Given continued uncertainty over Libya’s mineral resources and BP’s interest in them—the firm also recently hired a former British spy with deep contacts in the Libyan business community—the oil giant stands to benefit from Morrell’s access to Pentagon insiders who can keep “helpful” US warplanes buzzing over North African shores.