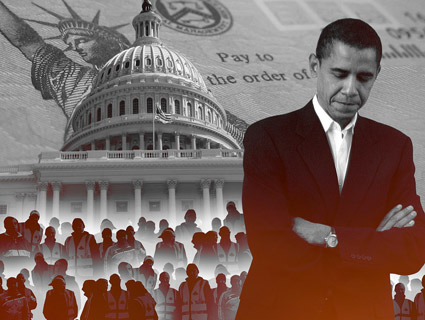 While the structure of what President Obama has proposed to get jobs fired up throughout the nation is an excellent beginning, there will be those—including myself—who believe that far more has to be committed to the investment side of the proposal to really make a serious difference.

While there is no disputing the importance of the investment being made for badly needed school modernization, the amount left for spending on important infrastructure repairs to our roads and bridges, while also taking a significant step forward in bringing our transportation system into the 21st century, falls far short of what is required to make a real impact.

Yes, there are political realities. If the President is going to be constrained by only making those investments that he can pay for by raising taxes on the wealthy and highly profitable corporations or by cutting elements from the other federal programs, it is going to be impossible to get the job done.

But there is a way. It’s called debt.

With the GOP successfully pushing the narrative that debt—in any form—is the evil threatening to take the nation over the cliff, it’s time to remind the more sensible among us that debt can sometimes be a very good thing.

At its core, it is a very simple proposition. If you can make a good case that borrowing at a given interest rate will produce a predictable return—one that not only allows for timely repayment of the debt obligation but is highly likely to create ongoing, future profits as a result of the investment made with borrowed money—debt is an excellent way to go.

Currently, the federal government can borrow at an astonishingly low 2 percent interest rate. If we can make investments that will produce a predictable return of at least 3 percent in increased revenue, why would we not want to take advantage of these low rates to make those investments?

Recently, MoJo’s Kevin Drum proposed a one trillion dollar investment in the nation’s infrastructure—a figure that is wholly realistic in terms of the country’s needs in this regard, and for really making a dent in the jobless figures.

This sort of committment can only be accomplished by borrowing money.

Not only would a national infrastructure program on a massive scale create the jobs that will more than increase our federal revenues by 3%, the improvements would be the gift that keeps on giving, as they would bolster our ability to modernize and continue as a world economic leader long into the future.

The Obama Administration, in its 2010 report entitled “An Economic Analysis of Infrastructure Investment” (surprisingly interesting reading), highlighted the benefits of investment in transportation. It noted that improvements in mass transit will save Americans a huge amount of money and go a long way toward dealing with our energy problems—while also creating a good return on investment.

The President’s proposal emphasizes transportation choices, including mass transit and high speed rail, to deliver the greatest long-term benefits to those who need it most: middle class families. The average American family spends more than $8,600 a year on transportation, one-third more than they spend on food. For the 90 percent of Americans who are not among the top decile in income, transportation costs absorb one out of every six dollars of income. This burden is due in large part to the lack of alternatives to expensive and often congested automobile travel. Multi-modal transportation investments are critical to get American families moving again without wasting their time and their money sitting in traffic.

The wave of jobs created by such a large program would be a pretty welcome development, too.

Certainly, there is also bad national debt, the kind that produces no return. Unfortunately, we have lots of that.

Every time the federal government goes to the markets to borrow money to pay for deficits in Medicare, this is money that will not be producing a cash benefit. Every time we fulfill our national obligation to help out our fellow citizens who are hurt by natural disasters, this is money that is not going to flow into U.S. coffers.

And yet, these are expenditures we must make. Medicare is a hugely important obligation to which millions of people have contributed in the belief that it will be there for them when they reach 65 years of age. The federal government has an obligation to insure that these people get the benefit of this arrangement. Similarly, we cannot turn our back on Americans ravaged by hurricanes and earthquakes who are suffering through no fault of their own. To do so would just be wrong. The federal government must therefore make investments that will produce the revenues needed to pay for our societal safety net.

Yet, in our current environment, this is never going to happen. So successful are the Republicans at selling the story that all debt is bad, and so weak have the Democrats been in their response to this false narrative, that we now find that Democrats are actually treating the Republican pitch as if it were gospel.

Primarily because it is difficult to educate the public to understand that not all debt is bad—particularly after the GOP has done such a fine job of convincing Americans otherwise through the effective use of easy to understand sound bites intended to provoke fear and anger.

But a fearful talking point doesn’t make the Republicans right. It simply serves to poison the politics to the point where the nation is unable to utilize solid and sensible business principals when attempting to deal with our many challenges.

The $450 billion program the President has proposed is a healthy and meaningful start, but it is not enough to really get the job done. With approximately half of the money being spent on extending unemployment benefits and improving the payroll tax holiday, which are useful and necessary tools to be sure, there simply isn’t enough left in the package to embark on the type of national building and repair program that will produce the big returns that can fund our social and defense obligations so we don’t need to borrow stupidly to pay these bills.

The American Jobs Act proposed by the President will make for a good start in 2012. But if the President wants to be the man who made the difference, he is going to have to think beyond the limitations presented by the Congress, explain to the American people the difference between good debt and bad debt and get things set up for a second term that will permit for the real growth the nation so badly needs.