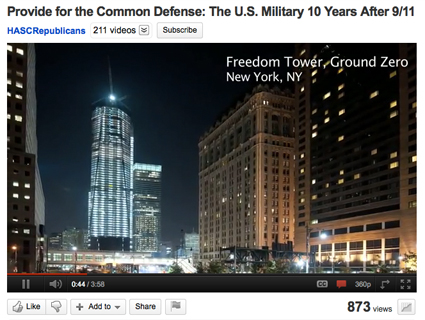 With the tenth anniversary of 9/11 upon us, Republican members of the House Armed Services Committee have released a video collage of WTC imagery that warns their Senate counterparts: Cut defense spending, and you’ll be responsible for the next attack on America.

“Our No. 1 priority, I think, should be as a Congress to protect our nation,” intones a black-and-white, professionally cropped House Armed Services Committee Chairman Buck McKeon (R-Calif.) in the video, embedded below. “What if we’re attacked in some other area? What is our military going to be able to do if we keep cutting them?”

The Democratic-led Senate is returning from its summer break to pass a military spending bill, and indications are that it’ll slash some of the pork that the Republican House tried to slip in. Already, the Senate’s budget committee has trimmed $26 billion of fat from the 2012 defense budget it got from the House—cuts required by the bipartisan debt-reduction deal Barack Obama signed last month.

And there’s plenty to cut, thanks to McKeon and his congressional cohort. This spring, they preserved defense earmarks after vowing that they wouldn’t; voted to make more Humvees the Army doesn’t want (and reject Afghanistan base defense systems that it did); to keep an unnecessary $3 billion GE contract to build an “alternative engine” for the single-engine Joint Strike Fighter, whose costs are approaching $1 trillion; and to repatriate US victims of the 1804 Barbary War in Libya.

In their defense, they did vote to trim defense dollars by banning color copies at the Pentagon.

McKeon’s message is the GOP’s good ol’ “strong on defense” refrain—if you watch it to the end, you can hear soldiers shouting a marching cadence that goes, “Fired up! Here we go!”—but it’s shaky on substance. “Our fighter squadrons have dropped from 82 to 39,” McKeon worries. “Strategic bombers, 360 down to 154.” Yet he never mentions how $2 billion stealth bombers might have kept 19 terrorists from hijacking commercial jets and plowing them into US buildings. (The cost to produce eight such bombers is equivalent to the entire budget of the US State Department [PDF].)

“We’re the smallest Navy we’ve been since 1916,” McKeon continues, failing to note that in 1916, the US had no aircraft carriers or nuclear missile-carrying submarines, much less guided-missile cruisers, destroyers, and frigates. None of which, again, have proved useful in preventing 9/11, or any other potential terrorist attack on US soil.

Perhaps the unintentionally funniest line in the video is this: “Tell me what missions that we’ve done in the last couple of years that we are not gonna be asked to do in the next couple of years.” Rep. McKeon, please see: Iraq, the $3 trillion invasion of.