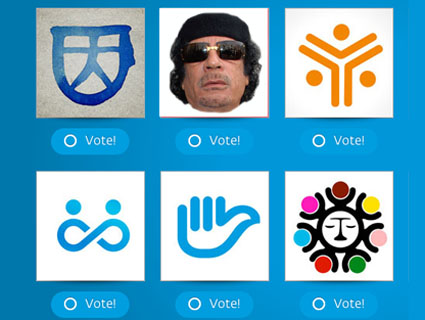 Maybe the idea of universal human rights would catch on if it had a memorable emblem. That’s the idea behind the Logo For Human Rights project, which is currently holding a competition to crowdsource a logo that it hopes, as the promotional email that landed in my inbox yesterday explains, “will become as iconic as the peace sign and serve to advance the global spread and implementation of human rights.”

Since the logo campaign kicked off in May, more than 15,000 designs from more than 190 countries have been submitted. You can still vote for your favorites among the 10 finalists on its website through September 17. The contest has picked up endorsements from human rights “celebrities” including Chinese dissident Ai Wei Wei and Nobel Peace Prize winners Aung San Suu Kyi, Shirin Ebadi, Muhammad Yunus, Jimmy Carter, and Mikhail Gorbachev. Among the campaign’s partners are Google and Cinema for Peace, a German foundation whose awards galas have been attended by Sean Penn, Leonardo DiCaprio, and George Clooney. The winning logo will be unveiled at a bash in New York on September 23. Wikipedia founder Jimmy Wales will be there—no word yet on other celebs.

Which all sounds great, except that the PR firm that contacted me to publicize the event is Brown Lloyd James, which is also in the business of rebranding governments that couldn’t care less about that shiny new logo.

According to records filed with the Department of Justice, in November 2010 the strategic communications agency landed a $5,000-a-month contract in which it “liased” between Syrian first lady Asma al-Assad and Vogue. The resulting glowing profile (since yanked from the Vogue website) described her as “glamorous, young, and very chic—the freshest and most magnetic of first ladies…a thin, long-limbed beauty with a trained analytic mind who dresses with cunning understatement.” Syria, it claimed, was “the safest country in the Middle East.”

In 2008, Brown Lloyd James signed a contract with a Libyan oil-drilling magnate to help Colonel Muammar Qaddafi clean up his international image. To that end, the firm assisted with an op-ed in his name and “reached out to newspaper editors to discuss placement and proposed edits.” It also helped set up speeches for him at the United Nations and Georgetown University. (However, BLJ noted in its federal filings that it “did not advise on the content or delivery of these speeches.” Highlights of his rambling UN speech included sticking up for the Taliban and suggesting that swine flu was man-made.) The firm reported that the Libyan Mission to the UN reimbursed it more than $1.2 million for “logistical support.” In England, BLJ promoted Qaddafi as “a fascinating contemporary world figure” and arranged for him to give a video address at the London School of Economics.

The agency was one of a handful of PR shops that represented Qaddafi and his family, as Mother Jones has reported. Defending his firm’s choice of clients, BLJ partner Sir Nicholas Lloyd told PR Week UK, “At the time, Libya was recognised by British and American governments. They all did business with Gaddafi.”

When I inquired how Brown Lloyd James squares its current work for the human rights logo campaign with its previous work for the Assad and Qaddafi regimes, the company sent me this statement:

Working to advance the rights of all is a positive moral value and business practice. It is something we have done for years on behalf of a host of groups and individuals. Whether it was encouraging a better understanding of the groundbreaking role of Al Jazeera in the Arab world, establishing United Nations-recognized days in support of autism and the plight of widows, or supporting the first ever visit of Human Rights Watch to Libya, advancing social progress is at the core of our work. This is why we proudly support the first ever Human Rights Logo, which will create a common language for people around the world to communicate on this important global issue..

Unfortunately, BLJ’s message of social progress didn’t get through to Damascus and Tripoli. Maybe the winning human rights logo will be more successful.

Update: A few hours after this post was published, the Human Rights Logo Initiative tweeted, “@MotherJones thanks for pointing this out! BLJ helped announce NY event,they’re not part of the initiative. There’ll be no further cooperation.”