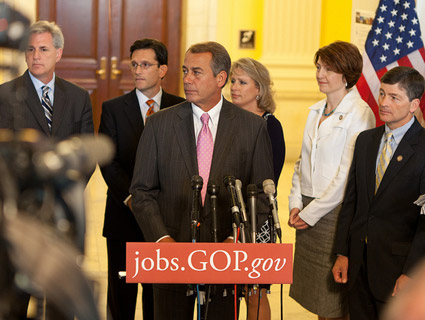 It’s become a mantra on Capitol Hill and a rallying cry for industry groups: Get rid of the job-killing regulations. In recent days, with nearly every one of the GOP presidential candidates repeating that refrain, the political echo chamber has grown even louder. Earlier this month, President Obama also asked the Environmental Protection Agency to back off more stringent ozone regulations, citing the “importance of reducing regulatory burdens” during trying economic times.

But is the claim that regulation kills jobs true?

We asked experts, and most told us that while there is relatively little scholarship on the issue, the evidence so far is that the overall effect on jobs is minimal. Regulations do destroy some jobs, but they also create others. Mostly, they just shift jobs within the economy.

“The effects on jobs are negligible. They’re not job-creating or job-destroying on average,” said Richard Morgenstern, who served in the EPA from the Reagan to Clinton years and is now at Resources for the Future, a nonpartisan think tank.

Almost a decade ago, Morgenstern and some colleagues published research on the effects of regulation [PDF] using ten years’ worth of Census data on four different polluting industries. They found that when new environmental regulation was applied, higher production costs pushed up prices, resulting in lost sales for businesses and some lost jobs, but the job losses were also offset by new jobs created in pollution abatement.

“There are many instances of regulation causing a specific industry to lose jobs,” said Roger Noll, co-director of the Program on Regulatory Policy at the Stanford Institute for Economic Policy Research. Noll cited outright bans of products—such as choloroflorocarbons or leaded gasoline—as the clearest examples.

That’s supported by recent data from the Bureau of Labor Statistics, which shows employers attributing a small fraction of job losses to governmental regulations. In the first half of 2011, employers listed regulations as the cause of 0.2 to 0.3 percent of jobs lost as part of mass layoffs. But the data doesn’t track the other side of the equation: jobs created.

“The key point is that regulation affects the distribution of jobs among industries, but not the total number,” said Noll.

That point is also echoed by Richard Williams, a former FDA official who’s currently Director of Policy Research for the free-market oriented Mercatus Center at George Mason University. (The center has ties to Koch Industries, an energy conglomerate that’s spent tens of millions lobbying against regulations. Koch’s chairman and CEO, Charles Koch, sits on the Mercatus Center’s Board of Directors.)

In a phone conversation, Williams expanded on his point. “It’s certainly true, as people say, that regulation does create jobs,” he said. “It requires firms to do something that they’re not doing now, so often they need to hire.”

But according to Williams, the more important question is whether the jobs created by regulation are good jobs or more valuable jobs—a question he says hasn’t been adequately addressed by government analysis or by academic research.

Susan Dudley, the former White House regulatory chief under President George W. Bush and now director of the George Washington University Regulatory Studies Center, reiterated that point.  Regulations can be counterproductive even if they result in more hiring.

“It would be easy to think of a regulation that ‘created jobs’ that didn’t benefit society,” Dudley said via email, such as “requiring that all construction be done with a teaspoon.”

In other words, counting jobs gained or lost is too narrow a prism through which to evaluate whether a regulation is good or bad. The real question is whether it improves waterways or lengthens lives or protects the public as promised.

“The issue in regulation always should be whether it delivers benefits that justify the cost,” said Noll. “The effect of regulation on jobs has nothing to do with the mess we’re in. The current rhetoric about regulation killing jobs is nothing more than not letting a good crisis go to waste.”