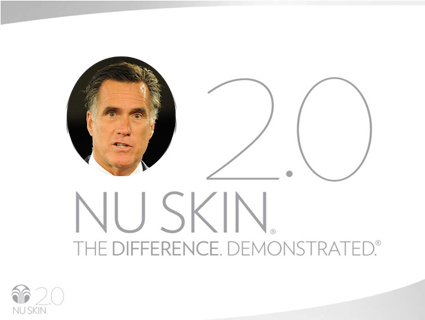 Mitt Romney is probably best known for his work at the private equity firm Bain Capital. But the former Massachusetts governor and current GOP presidential contender also has close ties to a Utah-based company—one that doesn’t have quite the cachet of the Wall Street power broker Bain. Instead, some of Romney’s most loyal financial backers hail from a Provo, Utah-based company called Nu Skin that has had repeated run-ins with federal regulators for deceptive business practices and has been criticized as nothing more than a pyramid scheme.

In August, MSNBC broke the news that a new super-PAC had been created to support Mitt Romney’s presidential bid, and that one of the donors was essentially a shell company that dissolved right after giving $1 million to the PAC. Buried in the story, though, was some other interesting news about the PAC’s funders. Two other companies later outed as shell corporations that didn’t do any business also donated $1 million each to the super-PAC. Both of those companies were founded by top operatives of Nu Skin, including the former CEO and cofounder of the firm, Steven Lund, a longtime Romney supporter. On Monday, the Washington Post noted that Lund is a big Romney supporter and described his firm as one that specializes in anti-aging creams.

But what the Post missed is that unlike the Wall Street financial whizzes Romney is usually associated with, Nu Skin is what’s known as a multilevel marketing firm. It supposedly sells vitamins and skin care products (the Post called Lund the “luxury cosmetics king”). But virtually none of its revenue comes from selling anything. Instead, its money comes from recruiting a never-ending stream of new distributors who are the primary buyers of the company’s products and who pay to attend seminars in the hopes of making big bucks. Of course, most of the people who take the plunge lose money rather than earning it. As a result, Nu Skin has a long and troubled history with regulators dating back to the early 1990s, when several states were investigating the company for operating a pyramid scheme.

In 1992, Nu Skin settled a threatened lawsuit with the Michigan attorney general’s office and four other states, promising to clean up its business practices and to pay $25,000 to cover the cost of the investigation. It later paid $85,000 to settle a suit with Connecticut, where then-attorney general (and current US senator) Richard Blumenthal had filed suit alleging that it was an illegal pyramid scheme. (Incidentally, during this time when Nu Skin was under fire from state consumer protection officials, its official spokesperson was Jason Chaffetz, who now represents Utah’s 3rd District in Congress.)

Nu Skin also got into hot water with the Federal Trade Commission for making false claims about its products, including weight loss supplements and baldness cures, and for misrepresenting the earnings new distributors would make. (The FTC alleged that Nu Skin failed to disclose that new distributors made virtually no money, despite its promises of easy wealth.) In 1994, the company settled a case with the FTC and signed a consent order promising not to engage in false advertising and to stop misleading potential distributors, among other things. In 1997, it paid $1.5 million in civil penalties for violating the order. These actions are one reason that for the past decade, 85 percent of the company’s distributors are in Asia, where the market is not yet oversaturated with distributors and consent orders don’t apply, according to company critic Jon Taylor, the head of the Utah-based Consumer Awareness Institute. Taylor used to be a Nu Skin distributor himself.

Romney’s ties to the firm go back at least to his time overseeing the 2002 Salt Lake Winter Olympics, when Romney convinced the company to contribute $20 million to sponsor the city’s Olympic effort.

That Nu Skin would pop up in the Romney super-PAC controversy isn’t much of a surprise. Romney’s ties to the firm go back at least to his time overseeing the 2002 Salt Lake Winter Olympics, when Romney convinced the company to contribute $20 million to sponsor the city’s Olympic effort. After the sponsorship deal was announced in 1999, Romney appeared at the company’s 10th international convention in Salt Lake City, where more than 10,000 of the company’s distributors had assembled for a meeting. Romney took the stage to address the crowd, telling them that both Nu Skin and the Olympics are “about taking control of your life and managing your own destiny.”

But even then, Romney’s deal sparked controversy because of Nu Skin’s troubled history and the appearance that Nu Skin was trying to buy its way to legitimacy. Speaking at the 1999 convention with Romney, Lund, then Nu Skin’s president, didn’t dispel that impression when he told the assembled distributors, “We have aligned ourselves with the Olympics because this alignment helps you do your jobs better.” According to the Deseret News, Lund promised that the Olympic rings affixed to distributors’ business cards would bring them loads of new recruits. Plus, Lund said, the Olympic affiliation “will also further mainstream our brands in the business community.”

As part of the Olympic sponsorship deal, Nu Skin and its subsidiary Pharmanex distributed nutritional supplements and vitamins to the athletes even as the International Olympic Committee was advising athletes not to take any of the supplements because of concerns that they may be adulterated with steroids and other banned substances that could get athletes kicked out of the games. The IOC cited lax US regulation as the problem. Romney insisted that he had no problem with Nu Skin’s quality, and the company ended up having its name splashed all over TV for two straight weeks.

Nu Skin seems to be returning the favor. The company’s founder and chairman, Blake Roney, became a bundler for Romney in 2007, and he is a partner in Rainmaker Sports and Entertainment, a Utah political consulting firm that worked on Romney’s 2008 campaign. Lund has donated tens of thousands of dollars. Nu Skin employees donated $40,000 to Romney’s 2008 campaign, according to data collected by the Sunlight Foundation.

More importantly, though, Nu Skin may also be serving as an important conduit for Romney’s Mormon donors. In his last campaign, he raised more than $5 million in Utah, tapping the Mormon community’s wealth in a way no other presidential candidate had before. But in 2006, Romney came under fire for meeting with officials of the LDS church to discuss setting up a donor network. The church is barred by its tax-exempt status from supporting candidates. But Romney could have done worse than picking Nu Skin as a substitute for the church.

Nu Skin is dominated by Mormons. Roney and Lund are heavily involved in the church. Last year, the pair donated hundreds of thousands of shares of Nu Skin stock to the LDS church, which sold them for a whopping $10 million. The pair also underwrote a PBS documentary on Mormons in 2007, during the heated battle over California’s anti-gay marriage initiative Proposition 8, which was supported by the LDS church. In 2003, Lund stepped down as Nu Skin’s CEO and served for three years as the LDS mission president in Atlanta before returning to Utah to join the church’s Fifth Quorum of Seventy, a full-time leadership post in the church. (He’s currently the vice chairman of the board of Nu Skin.) Roney is such a church supporter that he commissioned a Mormon sculptor to carve giant pieces of stone into replicas of the original sunstone capitals that were part of the legendary 19th-century Mormon temple in Nauvoo, Illinois. He put them in his front yard in Provo.

Even so, Taylor, a retired professor from Romney’s alma mater, Brigham Young University, says that given Romney’s business background, he should know better than to get in bed with a company like Nu Skin. Taylor also fears what might happen nationally with these companies if Romney were to get elected. He notes that George W. Bush, who was elected with a huge boost from another pyramid-type company, Amway, virtually put an end to regulatory actions against such companies during his administration.

“Do you think Romney’s going to support any FTC efforts to clamp down on ’em? I don’t think so,” he says. “He is certainly not likely to advocate for consumers on this issue. In its proposed Business Opportunity Rule, the Federal Trade Commission has already caved in to the MLM industry in exempting MLMs from having to disclose information that would help consumers make an informed decision.” Romney, Taylor says, isn’t likely to “buck that trend, given the amount of donations from these MLM companies.”