In a contentious public meeting Monday night, the Broward Republican Executive Committee, a Republican group in Southern Florida, voted to deny Nezar Hamze, a Muslim-American Republican, membership. The group maintains that Hamze’s religion had nothing to do with their vote, but group members told reporters that the man’s affiliation with an Islamic relations group made members uneasy and could have been the basis for his rejection.

In early September, conservatives in Broward County, where the committee is based, were outraged after hearing of Hamze’s plans to apply to join their ranks. Hamze, the executive director of the Council on American-Islamic Relations of South Florida (CAIR), later explained to Salon’s Justin Elliott why he applied: “A lot of Muslims I know, their values really line up with the conservative values of the Republican party. I’m a strict social conservative, a fiscal conservative, a very strict constitutionalist. The protection of civil liberties for all Americans is supreme.” Furthermore, Hamze told Mother Jones that he wanted to “bring Muslims into the mainstream political process.”

At Monday evening’s meeting, the committee passed rules to change the application process. Applicants were to now address the crowd and field questions, something Hamze did not expect. “I was blasted with 15 minutes worth of insults. They [crowd members] yelled ‘You’re a terrorist! You’re an Al Qaeda supporter! No way a Muslim is going to join BREC!'” The committee also decided that night to make the voting process more secretive: Voting was private and the ballots were later destroyed (the final tally was 158-11). According to the Miami Herald, the crowd “cheered loudly” after hearing the results of the vote. BREC members also questioned Hamze’s organization, CAIR, later telling the Miami Herald that Hamze’s affiliation with CAIR was the basis for his denial.

Hamze claims that BREC members handed out pamphlets (pictured below) detailing why Republicans should deny his admission. The pamphlet alleges that Hamze’s membership is part of a plot to undermine Florida Rep. Allen West. Some background: In August, Hamze sent a letter to West, asking him to stop working with anti-Muslim advocates like Pamela Gellar. West famously responded with a one-word letter, “NUTS!” The top of the pamphlet distributed on Monday reads, “NEZAR HAMZE WANTS AMERICANS TO STAND AGAINST CONGRESSMAN WEST.” It ends with, “We don’t need someone who has been attacking Allen West for almost a year from the OUTSIDE to now attack him from INSIDE the BREC!” 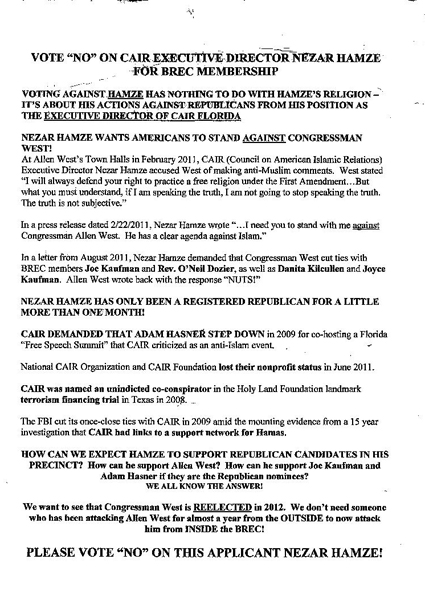 Others who attended the event, like Javier Manjarres, a Republican blogger in Florida, called the event “regrettable.” In a blog post, Manjarres alleges that BREC’s committee leader Richard DeNapoli, “orchestrated the rigged chain of events by planting his operatives in crowd, each of whom had a specific task to carry out during the proceedings.” DeNapoli says that Manjarres “has a beef with me” and that allegations that he placed people in the crowd are false. As for BREC members handing out pamphlets, DeNapoli says that’s something he can’t control. “I’m trying to prepare for the meeting and if someone is handing out stuff outside the door, it’s difficult for me to know what’s going on with that.”

Both Hamze and DeNapoli say that this was the first time they had witnessed someone being denied membership to BREC.