On Thursday, Senator Dick Durbin (D-Ill.) held a hearing on the rash of restrictive voter ID laws being pushed by Republicans all over the country. Voting rights activists have argued the laws will reduce turnout among minorities and the poor.

Republicans’ huge midterm victory last November translated into increased control of state legislatures, which they’ve used to pass new, more onerous restrictions on voting, sometimes explicitly for the purpose of suppressing votes from Democratic-leaning constituencies. Judith Brown Dianis of the Advancement Project called the wave of restrictions the largest effort to suppress the vote “since Reconstruction.”

The Lawyers’ Committee for Civil Rights has produced a map showing how many states are in the process of passing such laws: 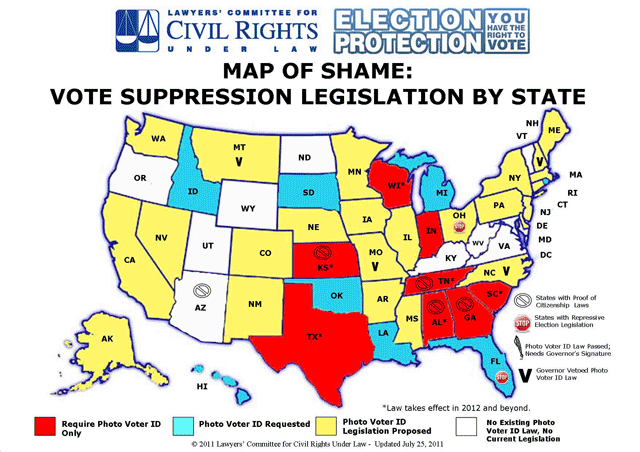 What the map doesn’t show is that five states, Florida, Georgia, Tennessee, Ohio, and West Virginia, have actually curtailed early voting as well. As Ari Berman reported, some of these ban voting on “the Sunday before the election—a day when black churches historically mobilize their constituents.”

“Americans are killed by lightning more often than they are victimized by fraud that voter ID would do something to stop,” said Justin Levitt, a professor of law at Loyola Law School. “We’ve amputated a foot to stop a potential hangnail.” The Brennan Center for Justice estimates that nearly ten percent of eligible voters lack the kind of photo ID required by these voter ID laws.

Republican defenders of voter ID laws claim that higher black turnout in Georgia during the 2006 and 2010 elections proves that voter ID laws don’t suppress the minority vote—an argument repeated by minority witness Hans von Spakovsky in his Senate testimony Thursday. But in states without such restrictions, the increase in black turnout was actually much larger. Von Spakovsky’s analyses would “fail statistics 101 at just about any college in the country,” Levitt said.

Rep. Todd Rokita (R-Ind.) tacitly acknowledged that instances of in-person voter fraud are few and far between, and prosecutions are even rarer. But, deploying the economic buzzword of the day, Rokita argued that “it’s not a matter of how many cases or convictions there are gentlemen, it’s about confidence.” Rokita suggested that more voter ID laws would increase turnout, saying that “we want to instill confidence in the process to turn up turnout.”

It’s the GOP’s economic austerity argument applied to voting: Make it harder to vote, and more people will vote.