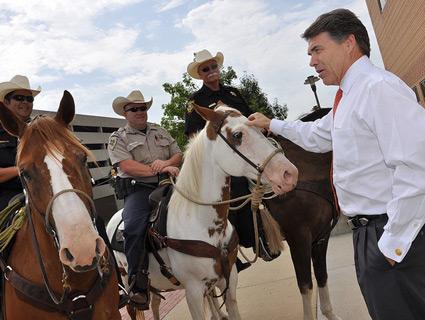 Under the banner of closing the state’s $27 billion deficit last winter, Texas Gov. Rick Perry floated a proposal to privatize the state’s prison health care network. Whether the plan would actually save the state any money was a matter of debate, but one thing was clear: The move would have been a boon for private-prison executives and lobbyists, including Perry’s former chief of staff, who had donated generously to his 2010 reelection campaign.

The plan met bipartisan resistance in the state Legislature, but it was just one of a handful of recent proposals by Perry’s office that would have benefited the industry—all in the name of deficit reduction.

Private prisons are a big business in Texas, where the combination of federal immigration policies and one of the nation’s largest inmate populations has led to a boom in construction over the last two decades. As governor, Perry, the front-runner for the GOP presidential nomination, has supported privatizing everything from public lands to highways, but according to Scott Henson, a criminal-justice watchdog who runs the blog Grits for Breakfast, the governor had remained largely quiet on the prisons issue—until this year.

That coincided with an influx of campaign contributions from private-prison executives and lobbyists, among them his former top aide, Michael Toomey, a political powerbroker who represents the nation’s largest private corrections contractor, Corrections Corporation of America. CCA, per its website, “provides health care services to male and female inmates and youthful offenders who are housed in local jails, detention facilities, and correctional institutions around the country.” (Toomey told Mother Jones he had not lobbied Perry’s office or the state Legislature on the prison health care plan; Perry’s campaign did not respond to a request for comment.)

Toomey, who had not contributed directly to any of the governor’s previous gubernatorial campaigns, opened up his wallet for two separate $10,000 donations to Perry two months before Election Day in 2010. Thomas Beasley, the founder of CCA, has given $17,000 to Perry’s campaigns over the last decade. Another private prison firm, the GEO Group, poured $15,000 into Perry’s 2010 reelection effort in 2010 through its eponymous political action committee. Luis Gonzalez, a GEO Group lobbyist, meanwhile, gave $50,000 to Perry’s reelection bid.

A flurry of privatization bills were introduced by Republican lawmakers during the regular, biannual legislative session, but all of them fizzled out. And then in June, as the Legislature scrambled to put together a budget during a special session, the plan resurfaced in two different pieces of legislation. First, an amendment was attached by a GOP lawmaker to an unrelated bill that would have transferred the authority for the state’s prison health care board to Perry by giving him the power to appoint the majority of the committee members. That proposal, which was jettisoned after it came to light, would have effectively given the governor’s office the power to unilaterally make sweeping changes to the system.

“There was no evidence that it could be done cheaper,” says state Rep. Jerry Madden, a Republican, who chairs the House corrections subcommittee and worked to have the language removed. A second proposal, a few days later, would have explicitly granted the corrections agency the power to solicit bids for prison health care services but not mandated it.

Earlier, Perry’s office had floated another proposal that seemed designed to please the private-prison industry. It sought to eliminate the independence of the Texas Commission on Jail Standards and fold it, along with two other public-safety commissions, into a single agency. The governor’s office justified the move, which ultimately fell short, as a spending measure, a chance to eliminate bureaucratic redundancies. But critics saw a pattern.

“One of the things that the commission has always wanted is to have control over the private prisons,” says Ana Yanez-Correa, executive director of the Texas Criminal Justice Coalition, which monitors prison reform in the Lone Star State. “Obviously [the governor’s office] didn’t like that, so this session they tried to dilute the power of the commission by merging it with two other entities.”

Perry has drawn scrutiny for his cozy relationships with top donors. According to the group Texans for Public Justice (PDF), nearly 20 percent of the governor’s fundraising totals since 2001 have come from people whom he has appointed, while programs like the $200 million Texas Enterprise Fund, designed to help the state lure new businesses with tax incentives, have been criticized as a “slush fund” for Perry donors. Toomey, the aide-turned-lobbyist who Texas Monthly ranked as one of the 25 most influential politicos in the state, was the key player in Perry’s decision, overturned by the Legislature, to require all adolescent girls to receive an HPV vaccination. At the time, Toomey was a lobbyist for Merck, the pharmaceutical company that manufactured the vaccine.

Toomey, known in Austin as “Mike the Knife,” served as Perry’s chief of staff for almost two years, from November 2002 through September 2004. The two have remained close—in August, Toomey formed a Super PAC, Make Us Great Again, specifically to support Perry’s presidential campaign. He added CCA to his client roster in 2007.

In 2003, Perry signed a line-item veto eliminating the funding for the Texas Criminal Justice Policy Council, a state agency tasked with providing “objective analysis and assessment of state criminal justice programs and initiatives.” According to the Austin Chronicle, the decision to pull the plug on the agency came from Toomey, who had lobbied for prison contractors before he worked for Perry. (Toomey has denied any involvement in the program’s elimination.)

Perry’s rush to privatize prison health care is consistent with the approach he’s taken throughout most of his 10 years as governor: slashing public services under the guise of austerity, and then contracting those services out to the well-connected businesses that have made his rise possible. As he put it during his reelection campaign in 2010, as the private-prison industry filled his war chest with donations, “Texas is open for business.” To his critics, those words have never rang truer.