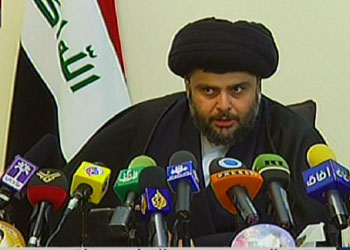 On the eve of the 9/11 anniversary, Muqtada Al-Sadr, the firebrand Shiite cleric who’s long been an erstwhile enemy of American troops in Iraq, made the United States a fascinating offer: His followers won’t threaten our forces, so long as they’re gone from Iraq by the end of the year.

The proposed truce means that Sadr—a political survivor who has tangled twice with US troops and whose loyalists played a significant role in the killings that escalated Iraq’s civil war—would lay down his arms as long as the US sticks to the withdrawal agreement it signed with Iraq’s president in 2008, the New York Times reports. But there’s a problem: Republicans on Capitol Hill who want to stay dug in. “Now, the US has an opportunity finally to extricate itself from the nightmare,” writes Middle East expert Juan Cole, “but powerful forces in Washington are trying to ensure that the US keeps a significant troop presence in Iraq.”

That’s right: Senate conservatives, angered by reports that the White House might actually honor George W. Bush’s promise of withdrawal, are more hawkish than the anti-American Al-Sadr. The US hawks are led by John McCain (R-Ariz.) and Lindsey Graham (R-S.C.), who would prefer to see 25,000 American soldiers remain in Iraq through 2012. “I think that the President of the United States…has a pattern now of ignoring or not adhering to the recommendations of our military leadership,” McCain complained to Fox News least week. “Now, I don’t question the president’s authority to make his own decisions, but I do question…whether those decisions or not are good for America’s national security.”

As usual, the Obama administration’s reaction has been to forge a possible compromise: US diplomats are reportedly in talks with Iraqi President Nouri Al-Maliki to leave a contingent force of 3,000 American troops in country past the withdrawal deadline. With just a few months left till zero hour and not much legal wiggle room, it’s unclear precisely what the US presence in Iraq, if any, will be on January 1, 2012. But conservatives and liberals seem to agree that the Obama compromise is a big mistake. “It may be better not to have any than to have just 3,000 there,” McCain told Fox.

Cole was more to the point. With Sadr controlling a large bloc of the Iraqi parliament as well as thousands of men on the street, he wrote, reneging on the Bush-era pullout deal would be a strategic and moral catastrophe: “3,000 US troops aren’t troops, they are hostages waiting to be taken.”