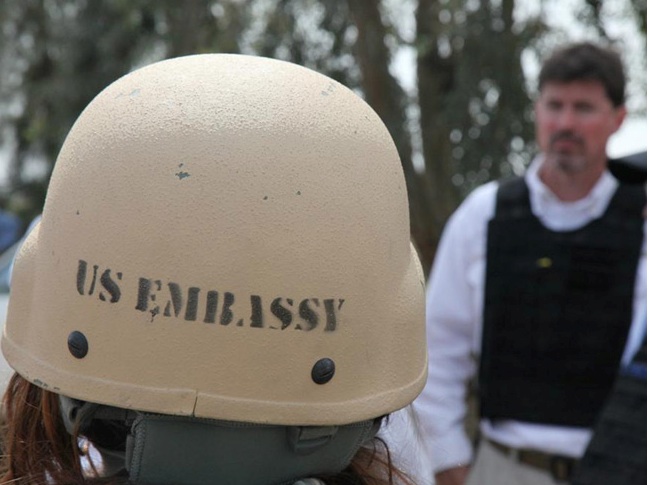 One morning earlier this month, a man named Peter Van Buren was seated inside a drab, windowless interrogation room at the State Department and grilled for an hour and a half by agents from the Bureau of Diplomatic Security, the department’s internal enforcers. The agents told Van Buren that he was under investigation for exposing classified government data, and they wanted him to come clean. “Name names!” the agents demanded.

Sounds like yet another grim episode of this country’s never-ending war on terror, right? Not quite.

Peter Van Buren is no insurgent. Quite the opposite: For 23 years he’s worked as a foreign service officer at the State Department, and a damn good one from the looks of it. He speaks Japanese, Mandarin Chinese, and Korean; served his country from Seoul to Sydney, Tokyo to Baghdad; and has won multiple awards for his disaster relief work. So why was Van Buren treated like a terror suspect by his own employer? For linking to a single leaked cable dumped online by WikiLeaks earlier this month.

But as Van Buren describes in a rare and fascinating glimpse inside the workings of the State Department, his interrogation more likely resulted from his new book, We Meant Well: How I Helped Lose the Battle for the Hearts and Minds of the Iraqi People. It’s a shocking, Catch-22-like tale of Van Buren’s year running a Provincial Reconstruction Team in Iraq. The stories he recounts—a $171 million hospital “opened” by Laura Bush in 2004 that didn’t see a single patient in the next six years, a $2.5 million chicken processing plant that Iraqis didn’t want and never got used unless US goverment officials came to visit—should make the most rabid foreign policy hawk question the wisdom of America’s nation-building efforts. (You can find some of those stories on Van Buren’s blog, also titled We Meant Well.)

Here’s an excerpt from Van Buren’s story, with him back in the interrogation room for a second go-round:

Back in that windowless room for a second time, I faced the two DS agents clumsily trying to play semi-bad and altogether-bad cop. They once again reminded me of my obligation to protect classified information, and studiously ignored my response—that I indeed do take that obligation seriously, enough in fact to distinguish between actual disclosure and a witch-hunt.

As they raised their voices and made uncomfortable eye contact just like it says to do in any Interrogation 101 manual, you could almost imagine the hundreds of thousands of unredacted cables physically spinning through the air around us, heading—splat, splot, splat—for the web. Despite the Hollywood-style theatrics and the grim surroundings, the interrogation-style was less police state or 1984-style nightmare than a Brazil-like dark comedy.

In the end, though, it’s no joke. I’ve been a blogger since April, but my meeting with the DS agents somehow took place only a week before the publication date of my book. Days after my second interrogation, the Principal Deputy Secretary of State wrote my publisher demanding small redactions in my book—already shipped to the bookstores—to avoid “harm to US security.” One demand: to cut a vignette based on a scene from the movie version of Black Hawk Down.

The link to Wikileaks is still on my blog. The Bureau of Diplomatic Security declined my written offer to remove it, certainly an indication that however much my punishment mattered to them, the actual link mattered little. I may lose my job in State’s attempt to turn us all into mini-Bradley Mannings and so make America safe.

The full piece itself is worth a read for a rare chance to see your government hard at work.