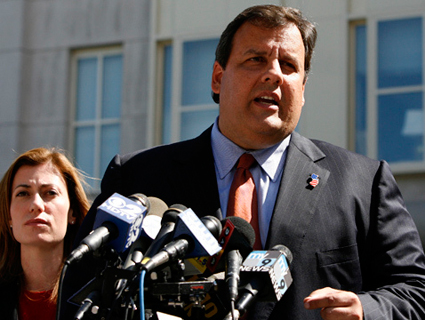 Chris Christie is not running for president. Despite months of breathless speculation, the Republican New Jersey governor made it official on Tuesday with a press conference in Trenton. As he put it, “New Jersey, whether you like it or not, you’re stuck with me.” There were plenty of obstacles to a successful Christie candidacy—among other things, he’s a conservative apostate on global warming, immigration, and the imminent takeover of American courts by Islamic extremists. He had no campaign organization, save for a few strategists who were holdovers from the hapless Rudy Giulliani campaign of 2008, and very little time to build one, what with the first primaries scheduled for January (if not earlier).

Christie’s decision was ultimately the same one he’s been trumpeting for more than a year: He’s not ready. Too bad no one listened. Here’s a quick recap of the will-he-or-won’t-he speculation, 14 months in the making:

September 20, 2010: Christie tells MSNBC he’s not running: “You’ve got to believe in your heart that you are ready to walk into the Oval Office and to lead the nation. And I don’t feel like I’m ready.”

November 6, 2010: Christie seeks to settle the issue once and for all:

January 17: On Fox News Sunday, Christie says again that he’s not running: “I am not arrogant enough to believe that after one year as governor…I am ready to be president of the United States.”

February 16: Christie tells an audience at the American Enterprise Institute that—again— “short of suicide, I don’t really know what I’d have to do to convince you people that I’m not running.” Sounds like a dog whistle.

March 2: Weekly Standard editor Bill Kristol pens an epic poem imploring Christie to run for President. Begins with the line: “Had we but world enough, and time/ This coyness, Gov’nor, were no crime.”

June 27: Christie tells Fox News, “if you don’t feel it in your heart, you have no business running.”

August 15: Weekly Standard editor Bill Kristol pens a second epic poem imploring Christie to run for President. Begins with the line “Had we but world enough, and time/ This coyness, sirrahs, were no crime.”

August 17: He’s not running! At a press conference, Christie denies reports to the contrary and says he won’t enter the race: “I said this answer isn’t changing and I don’t see any reason why it would.”

September 22: Indiana Gov. Mitch Daniels says of Christie rumors, “‘I’m not taking ‘no’ from Christie; I’m taking ‘not yet.'” At same event, Christie says that he’s not running.

September 23: Newsmax reports that after a “hush-hush pow-wow” with top donors, “Christie seemed inclined to enter the race but said he needed more time.”

September 23: Weekly Standard editor Bill Kristol tells a panel at CPAC Florida: “I know Chris Christie is thinking about it.”

September 24: After Rick Perry’s collapse at the Orlando GOP debate, Christie is “reconsidering” whether to run, according to Politico.

September 26: Former New Jersey Gov. Tom Kean tells Robert Costa: “He’s giving it a lot of thought. I think the odds are a lot better now than they were a couple weeks ago.”

September 27: Politico makes a video mashup of every single one of Christie’s denials.

September 27: After a fiery speech at the Reagan Library in which Christie referred to Politico‘s video mashup, Politico reports that Christie “didn’t issue a new denial.”

September 27: The Newark Star-Ledger catches up with Christie’s brother, Todd, who says Christie’s not running: “If he’s lying to me, I’ll be as stunned as I’ve ever been in my life.”

September 27: No, wait! ABC News reports that a “A source close to Chris Christie says we should disregard what the New Jersey governor’s brother said about Christie’s plans.”

September 28: National Review Online scores an exclusive interview with Chris Christie’s dad, who says he has no idea if his son will run. Not a denial!

September 29: The New York Post reports that Christie, urged on by Henry Kissinger, George H.W. Bush, and Nancy Reagan, could announce his president bid “as soon as Monday.”

September 29: The Star-Ledger reports that former Barbara Bush called Christie’s wife, Mary Pat, to tell her that her husband needs to run. The paper says Christie is “seriously considering” entering the race.

September 30: An Iowa activist tells the Washington Post that “something’s up now,” and that he’s been asked to stand by.

October 2: Maggie Haberman reports that Christie’s decision has come down to whether his wife, Mary Pat, is okay with him running.

October 2: Christie and his team spent the weekend mulling the logistics of a presidential bid, according to the WSJ.

October 3: A Daily Caller exclusive: Key Christie aides have told donors to be prepared to travel to Trenton on Thursday for a kickoff speech.

October 4: In a speech in Trenton, Christie announces that he’s not running for President. Scene.