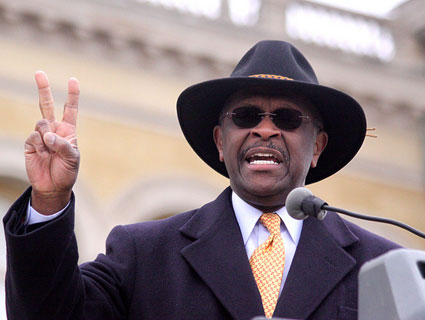 Just two days after arguing that Texas Gov. Rick Perry’s leasing of a piece of land once referred to as “Niggerhead” showed a “lack of sensitivity,” GOP presidential candidate Herman Cain is now saying that the issue “doesn’t bother me at all.”

“I really don’t care about that word. They painted over it,” he said, referring to a sign painted on a rock at the property the Texas Governor once leased. The Washington Post first reported Sunday that the slur appeared on the hunting grounds’ gated entrance.

Cain added that he was “not playing the race card. I am not attacking Gov. Perry.” What changed in the last 24 hours? Well for one thing, the conservative media made it profoundly clear to Cain that he had stepped out of line by the mere suggestion that a white Republican had acted inappropriately on an issue of race. In addition to conservative bloggers slamming Cain for “playing the race card,” (accusations notably absent as Cain issued broad generalizations about black voters being “brainwashed” ) Rush Limbaugh issued a condemnation—more than sorrow than in anger of course. “I’m gonna tell you, this is really disappointing to me. Herman Cain. I liked Herman Cain—like Herman Cain,” Limbaugh said. “There is certainly no substance to it, and there was no reason for Herman Cain to try to piggyback this.” Doesn’t Cain understand that his job is to protect white Republicans from accusations of racism, not amplify them?

How desperate is Cain to nip this in the bud? Today’s Washington Post/ABC poll shows Cain tied with Perry for second place among Republicans nationally at 16 percent, with Romney, whom Cain endorsed last time around, leading the pack at 25 percent. Those numbers represent “a 13-point drop for Perry and a 12-point rise for Cain since early September.” As Slate‘s Dave Weigel notes, Cain’s criticism of Perry threatens to alienate the very white Republican voters whose support he’s seeking by making him look like, in conservative blogger Glenn Reynolds’ words, “just another black race-card-playing politician.” See, before, they thought Cain was one of the good ones!

As for the “Niggerhead” sign, which Perry says was painted over shortly after his family leased the property—Limbaugh has an explanation for that. “I think Perry, back when this happened in the eighties, was a Democrat.”