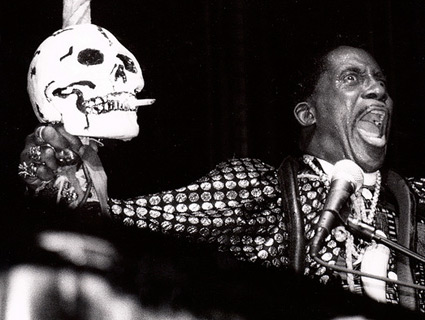 As All Hallows Eve creeps closer and closer, and you plod through your seemingly insurmountable workload, the anticipation of tonight’s festivities will begin to gnaw at the back of your mind like a—well, yes, like a zombie.

You’ve planned ahead: You’ll have the suds on ice, your living room will be predecorated to look like an oddly sexy graveyard, your topical Halloween costume is at the ready, and your party guests are set to arrive fashionably late.

But one thing slips your mind until it’s too late: the holiday-appropriate playlist. Oh, horrors!

Seriously, don’t panic. We’ve got you covered. From “pop encyclopedia” Elvis Costello to frat boy megastrategist Lee Atwater, here are 10 tracks that you can blast at any creatively themed October 31 party—from scary to scary-goofy to a handful that are just too damn Halloween to pass up.

1. Screamin’ Jay Hawkins shows us the true depths of “scary”: Hawkins’ macabre “I Put A Spell On You” is consistently ranked as one of the top Halloween tunes of all time, but it’s got nothing on his awesomely discomfiting gross-out masterpiece “Constipation Blues.” Short of watching the Jack Nicholson-Diane Keaton sex scene in Something’s Gotta Give, listening to this song is perhaps the scariest treat you can give your guests. The prototypical shock-rocker opens by saying that he and the band have “just returned from the general hospital” to record a song about “real pain.” Hawkins’ caricature of a man who can’t “let it go”—high-pitched squeals of agony and all—has to be heard to be believed.

2. Zombie attacks and disco: a match made in heaven: For their season two Halloween episode, the producers of NBC’s Community pitted their oddball cast against an onrush of infected, flesh-munching community college students. Their fight to stay un-undead is entirely scored to ABBA hits, which somehow manages to transform “Dancing Queen” into an anti-zombie ditty. The following scene (pricelessly set to “Mamma Mia“) has Troy playing the reluctant hero, punching and sprinting his way through a zombified costume party.

3. Mick Jagger’s rocker-gangster horror show: In the 1968 British cult film Performance, Mick Jagger made his big screen debut as a hoodlum-like, has-been rock star. “Memo From Turner,” the soundtrack’s best song, sinks into a gritty, psychedelic-blues pulse, framed by the slide guitar work of the always-masterful Ry Cooder. Jagger seductively sing-speaks his way through a sordid tale that includes a “great, gray man whose daughter licks policemen’s buttons clean” and a guy who “drowned that Jew in Rampton as he washed his sleeveless shirt.” The song is prominently featured in this surreal, freaky, violent sequence:

4. Johnny Cash, by way of bedlam: It wouldn’t be a debauched Halloween soiree without that sweet, sweet psychobilly flavor, now, would it? For their album Meathook Lover, The Tombstone Brawlers amped-up Cash’s “Folsom Prison Blues” into a sleazy, vulgar mess. The fuzz-soaked breaks and singer Lord Zacher’s whiskey-dicked country howl make for one loving desecration of the coolest prison song ever composed.

5. Speaking of Johnny Cash…: And now, The Man in Black takes the Book of Revelation out for a swing. “The Man Comes Around,” a Rick Rubin-produced acoustic gem off of the eponymous American IV: The Man Comes Around, paints a haunting portrait of that sunny part in the Bible where Jesus comes back to furiously kick the crap out of of anyone who didn’t accept him as the savior. This song also appears in the 2004 remake of George A. Romero’s Dawn of the Dead, during an opening credit sequence that cuts together news footage of global civilization imploding on account of zombie anarchy. It’s the most worthwhile scene in the movie, and it owes its apocalyptic vibe to Johnny:

6. The Devil’s Music, performed by the “the best political campaign manager who ever lived”: No progressive Halloween party would feel complete without a nod to liberal America’s foremost political boogeyman, Lee Atwater. A passable bluesman and six-string soloist, Atwater spearheaded the production of Red Hot & Blue, a 1990 R&B album featuring legends like Billy Preston, Sam Moore, and Isaac Hayes. In his horn-laced, slick-voiced rendition of “Bad Boy,” the late Republican icon got to live out his down-home musical fantasies in stereo LP format. This recording fits in nicely with a long line of GOP figures who actually know a thing or two about rocking out.

7. By all means, let’s dress up as brutal, blood-stained mobsters: There’s nothing easier than being a gangster for Halloween. If you’re a guy, you grab the nearest suit, you put it on, and you’re done. Presto. Male creativity at its finest. And if you’re intent on emulating any of Hollywood’s wiseguys, you might as well start brushing up on all those quotable lines from Goodfellas. Martin Scorsese’s magnum opus includes segments bloody and startling enough to match the impact of any modern horror flick. And much in the way that “Stuck in the Middle with You” will forever be associated with an infamous torture scene in Reservoir Dogs, Donovan’s tender folk song, “Atlantis,” will forever be remembered as the soundtrack to the murder of Billy Batts in Goodfellas. Play this one loudly as you serve the pumpkin rum:

9. L7 and Oliver Stone’s hyper-violent fever dream: L7, a heavy-riffing, tampon-hurling all-girl rock outfit, spent a nearly 15-year-long career navigating the line between grunge and straight punk. And their x-rated style was enough to nab the endorsement of Oliver Stone, who included their 1992 song “Shitlist” in the loopy opening credits of his gore-drenched satire Natural Born Killers. Here’s the song played to a montage of grisly, fright-filled clips from Stone’s hugely controversial film:

10. Is it a song, or is it a mass murderer? Okay, this one isn’t exactly a rave-up; it’s more suited to being the song you play while you and your closest friends clean up the floaters, the empty vodka handles, and the crusting vomit after the rest of the party has absconded to the nearest Waffle House at 5:30 a.m. “Gloomy Sunday,” Rezs? Seress and László Jávor’s funereal ballad, is Halloween-appropriate due to its dark urban legend mystique. According to innumerable (but uncorroborated) accounts, if you listen to this song, there’s a decent chance you’ll kill yourself. Seress’ 1968 New York Times obituary reads that “Gloomy Sunday,” also known as the “Hungarian Suicide Song,” “was blamed for touching off a wave of suicides during the nineteen-thirties…and Hungarian officials finally prohibited it.” Billie Holiday, Sarah McLachlan, Sinéad O’Connor, and countless others have recorded it, but the most soulful English-language version is still Elvis Costello’s. Here’s a live performance:

Also, a few runner-ups for your iPod:

Have an outstanding Halloween, MoJo readers, and be sure to click here for more music features from Mother Jones.